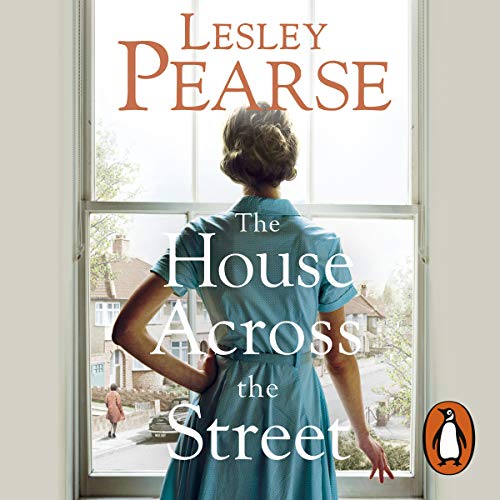 Penguin presents the audiobook edition of The House Across the Street by Lesley Pearse, read by Rosie Jones.

Twenty-three-year-old Katy Speed is fascinated by the house across the street. The woman who lives there, Gloria, is the most glamorous neighbour on the avenue, owning a fashionable dress shop in Bexhill-on-Sea. But who is the woman who arrives in the black car most Saturdays while Gloria is at work? Sometimes she brings women to the house, other times they have children.

Hilda, Katy's mother, disapproves of Gloria. She wonders if these mysterious visitors have just been released from prison. Is Gloria secretly bringing criminals, or worse, into the heart of the community?

Then one night, the house burns down. In the wreckage, the bodies of Gloria and her daughter are found. Katy is sure the unexplained visitors must be responsible until her father is arrested and charged with murder. Have the police arrested the correct person? Are the rest of the street safe? Can Katy find the truth before it's too late?

I love reading Lesley Pearce books and the reading of this book was so well done I enjoyed listening as much as reading. The characters were brought to life for me

I can always rely on Lesley Pearse for an awesome and captivating story and she never let me down with this book.

Loved this story, am fairly new reader of Lesley Pearse books and really am hooked. She keeps the characters alive and there is always something you can learn about life in her stories. A very good read. Narration was excellent.

Narrated by someone sounding like a primary school teacher talking to a class of 5 year olds. Poorly written tale with dull plot. Sorry not for me.

Sadly not a winner this time

Having eagerly anticipated this book even checking the ‘Airport Exclusives’ whilst going on holiday and having read ALL Lesley Pearse’s books, I was a little disappointed with this latest release.

The story seemed to go on a bit too much with no GREAT excitement - I felt if I skipped a few pages I wouldn’t have missed out on anything. oh well - this is only the first LP book I’ve Not particularly enjoyed so that’s not bad!

I just can't believe this book was written by the same person who wrote 'belle ' etc. it felt like I was reading a teenagers book. the narrating was terrible. I've read all Lesley s books and the last 2 have been rubbish. Come on Lesley what are you doing!

Very readable book, thoroughly enjoyed. One of her best books and I have ready of them.

This must be the poorest book by Lesley - the narrator sounded like a teenager. I did finish it but had already guessed the ending.

Not My Usual Cup ☕

A story of domestic violence and the importance of women's refuges all set to a 1960s Sussex back drop. It deals with quite harrowing issues and there is a good twist which wraps up nicely in the end. I don't usually read books like this but I kept seeing it on the shelf and I'm glad I did. Not mind blowing stuff but good entertainment.

Loved this. Couldn't put it down. Gripping story with a beautiful shout out to strong women. very uplifting.

It is OK.. not up to het usual standard

The narrator has a very child like voice, which I personally didn't like. Not a bad story but nowhere near as in depth as her other books. I'm a touch dissapointed.