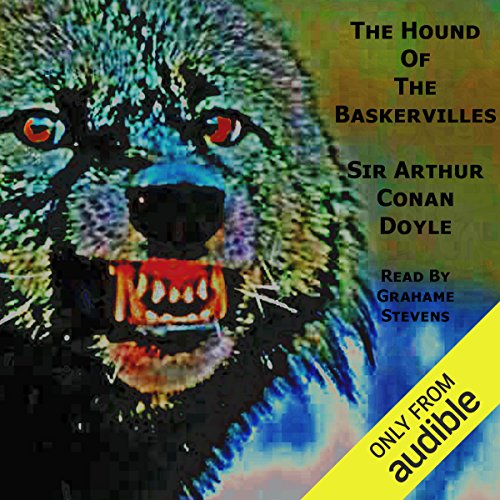 The Hound of the Baskervilles

Sherlock Holmes and Dr. Watson investigate the legend of a supernatural hound, a beast that may be stalking a young heir on the fog-shrouded moorland that makes up his estate. The best of the Holmes novels!

What listeners say about The Hound of the Baskervilles

Very hard to distinguish some characters, and Holmes has an obnoxious, lilting falsetto.

The store was adequate, but surprisingly predictable and straightforward.

The narrator read clearly and the different character voices were good but throughout the reading words and phrases were skipped or the wrong name was read. made it slightly confusing when reading along with the book

I was very pleased to find this, since I have having immersive difficulty reading the book myself and I have to have read it for school the only thing keeping it shy of 5 stars is the occasional stray from the book. A word changed here and there, or a word omitted. Once even a few lines omitted. And right before chapter thirteen, the narrator paused in the text to say “chapter thirteen” even though for my text, the chapter didn’t start for another page and a half. It is possible that my book is off compared to Conan-Doyle’s original text, but my copy is marked as complete and unabridged. Other than that, no complaints!

I have always loved this story but voice that Mr. Stevens chose for Sherlock was too falsetto. It kept taking me out of the story because it was so irritating.

Would you try another book from Arthur Conan Doyle and/or Grahame Stevens?

This isn't Conan Doyle's best work to begin with and needs a good narrator to lift it up. Unfortunately, this narrator is terrible and drags it down. Way down. Apparently he's a comedian by trade (not a bad thing in itself) and seems to think it's his job to make the prose sound ridiculous with an ironic attitude. He also didn't seem to know the story before he started to narrate...e.g. one character is described as having an odd lisping speech, which we discover is a clue that she's a native Spanish speaker, but Stevens plays it as a preposterous speech impediment.

If you’ve listened to books by Arthur Conan Doyle before, how does this one compare?

Worst narration by far of any of them. By far. In its own league.

It could have been a different person. Ralph Cosham, say. But really, anybody.

It's fun if well-narrated. Kind of thin for Doyle--he didn't have a novel's worth of plot but was apparently determined to make it a novel--but with a lot of great moments. The descriptions of the moor are pretty wonderful if read well. Not in this version.

If you haven't read any Holmes stories, I wouldn't start with this. Try The Adventures of Sherlock Holmes or A Study in Scarlet. If you want to listen to Baskerville, there are much better narrations of it on Audible. Hurry to those.

A treasure of all of Doyle’s stories. The eerie night of fog on the Moreland, as Sherlock and Watson take a night ride. Is the creature real or not. The suspense of the plot was well done by the narrator. Given audio for my. Voluntary review

Slow start with a strong finish

Hang in there! This one gets better and better and lives up to its reputation.

unbearably annoying narrator. all i could hear was his breathing and some other weird noises he made.

Very much understandable! I recommend this novel. I probably will read it again someday. Good times.

I love the Sherlock Holmes books. It is different reading this when you know whodunit, you lack the same level of intrigue and not knowing which of the red herrings are real. But this is such a classic, and it is great, well read (although I prefer Derek Jacobi's readings) and highly enjoyable

The book is gripping and a salutary lesson in the genre.

I have listened to over 100 books from Audible, and this is the worst narration I have experienced. I doubt the narrator had read the book before he embarked on the recording. He has no sense of characterisation. He mixes up the voices of the characters. He cannot imbue the story with the necessary sense of tension that it deserves. How on earth was he chosen?

Was The Hound of the Baskervilles worth the listening time?

The book is certainly worth the time. My advice is either read it yourself, or choose a narrator like Derek Jacobi who can add to the story by the intelligent use of inflection.

The best books are enhanced by being read well (Timothy West in Trollope; Martin Jarvis in Dickens; Juliet Stephenson in Austen). What is the point in engaging a narrator who cannot bring anything to the table?

The reading in the sample sounds OK, but I found it unnatural and awkward. It's worth spending the extra to get the Derek Jacobi version.

amazing for the time

A brilliant story. However I imagine some will find it slow for today's standards. Although it is arguably the most famous of his stories, it is the third in the line and should be read in that order.