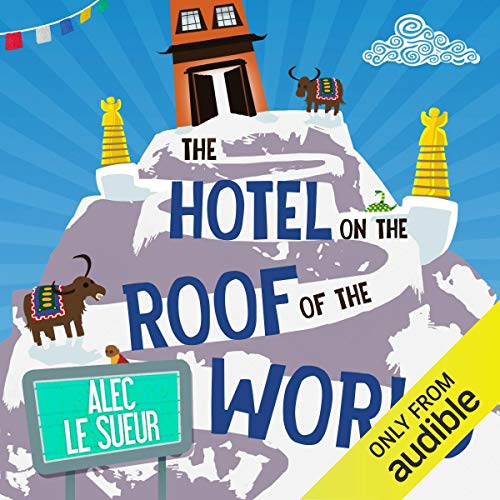 The Hotel on the Roof of the World

The very aptly named Mr Pong had the kind of breath that could stun at over 10 feet.… This wasn’t just bad - there was something rotten down there. Something had crawled in and died. Gunter howled with laughter as he saw the look of horror on my face. It was the best entertainment he had seen since he had watched Chef chasing yaks through the kitchens.

Few foreigners are lucky enough to set foot on Tibetan soil, but Alec Le Sueur spent five extraordinary years there, working in the unlikeliest Holiday Inn in the world. Against the breathtaking beauty of the Himalayas unfolds a highly amusing and enlightening account of his experiences. Fly infestations at state banquets, unexpected deliveries of live snakes, a predominance of yaks and everything yak-related, the unbelievable Miss Tibet competition, insurmountable communication problems and a dead guest are just some of the entertainments to be found at the Fawlty Towers of Lhasa.

Le Sueur, the only Westerner since the days of Heinrich Harrer to spend so long in Tibet, examines the country’s intriguing cultural background, providing a fascinating insight into a country that was only just opening up to the outside world.

“...offers lucid details about living in a place that westerners tend to misunderstand.” (Time Magazine)
“An hillarious account of a clash of cultures...a comparison with Fawlty Towers is inevitable, but this is funnier.” (Mail on Sunday)
“Imagine moving Faulty Towers from Torquay to Tibet...Le Sueur has distilled five years of real anecdotes into one hilarious volume...unbelievably true.” (Focus Magazine)

Loved the stories. Le Sueur's adventure was hilarious and insightful. A great trip down memory lane; if only he had recounted the unusual nappies that toddlers wear with holes in the middle so they can squat wherever they need...

Where does The Hotel on the Roof of the World rank among all the audiobooks you’ve listened to so far?

While it has its sombre moments when the harsh reality of an oppressed Tibet hits home, Alec Le Sueur creates a throughly enjoyable book that I highly recommend. Whether you listen to this as a Tibetan supporter or somebody looking for a little satire with your history, you will certainly be thankful that you took the time out to listen to the book.

If you're looking for a relaxed book to learn about Tibetan culture and landscape in a time closer to today, after Communists' "peaceful liberation," this book is great entertainment.

From a Westerner's point of view, it describes less of how the locals traditionally live than in The Noodlemaker of Kalimpong by Gyalo Thondup, more details about the present-day (late 1980s, early 1990s) culture than the high almighty Seven Years in Tibet by Heinrich Harrer, and very sarcastic about the current Chinese rule over Tibet. The cruel true events are covered, as well as ironic politics and corruption that is so true in every part of modern-day China. I enjoyed this book much more than Harrer's.

Completely inappropriate and tone deaf given the tragic sequence of events in Tibet as a result of the Chinese overrunning the country and its genocide against the Tibetan people.

only wish it was longer

An entertaining and funny story in a country where stories are usually spiritual or depicting oppression.

If you could sum up The Hotel on the Roof of the World in three words, what would they be?

Tashi, his explanation that he is Tashi. Tashi Delek.

The funeral. Having been China this is something I could see a guide doing.

The entire book is very funny. I laughed out load at several points.

I have been to China on several occasions’ both as a tourist (with China Spree), and while on business. China is a very unique place with an amazing culture. But, to our western way of life a lot of this culture is truly bizarre. This book demonstrates some of this culture, while still showing that we are all one tribe. We all generally want the same things out of life.
This is one of the best fish out of water stories that I have ever read… or been read. If you like humor like the Hitchhiker Guide or Monty Python you will love this book.

The content is great. The racist appropriation of Asian accents by the narrator is offensive and demeaning.

Would you consider the audio edition of The Hotel on the Roof of the World to be better than the print version?

I haven't read the print version but always feel that a well read audio book stirs both the left and right side of the brain ... therefore making it way more alive and valuable. It's a hard person to find who doesn't enjoy a book being read to them! This book is very well read with great impersonations. I'll definitely listen to it a few times over.

It stands alone but if I had to compare it to a variety of travel books - or even books in the humurous category - I'd say it would come out tops.

His impersonations were excellent. He brings the characters to life with ease.

I laughed quite a few times, and felt their frustrations a few times too.

Excellent book. Well worth listening to ... especially for travel readers who like to be taken to a lesser-known corner of the earth.

The best audiobook I have listened to

What made the experience of listening to The Hotel on the Roof of the World the most enjoyable?

The story is brilliant, the narrator gave the book a perfect flippancy and captured the situation perfectly. I have listened to this book several times and is performance is the best of any audiobook.

What was one of the most memorable moments of The Hotel on the Roof of the World?

The description of the Chinese airline and the onboard magazine made me laugh out loud.

Have you listened to any of Steven Kynman’s other performances? How does this one compare?

Funny and thoughtful. I felt like I was there with him and shared in his experience. Can't recommend highly enough.

What made the experience of listening to The Hotel on the Roof of the World the most enjoyable?

This is a very witty and amusing book which depicts unusual characters in a way that makes you feel that you know them too. The enjoyment not judgement that the author conveys in his descriptions and stories around the clash of cultures is hugely entertaining.

The only other travel books I have read have been Bill Bryson's, whose humour is more gentle and whose journeys are not so far afield. I loved listening to the problems that arose due to the very different cultures mismatch of expectations - both staff & visitors.

His reading matched the style of the book and had just the right tone and inflection to maximise the comic moments.

Very enjoyable but breaks were needed as I I felt I had to concentrate to take in all the information. No bad thing in any book.

I also worked in a hotel like Fawlty Towers so found this book funny and enjoyable and it brought back many memories.

The descriptions of the different characters that work in the hotel, and of course interesting facts about Tibet.

Yes - a really good read I would recommend to anyone. Very Funny

What does Steven Kynman bring to the story that you wouldn’t experience if you had only read the book?

Well told and easy to identify the characters

looking forward to listening again with my husband... and stay in the hotel.

While parts of the story are interesting and colourfully described, I’m finding the narrator’s Asian impersonations offensive and actually cringeworthy. To the point wherein I don’t really want to listen to the book anymore. I’m finding these parts demeaning as a result, with Tibetan culture or specific Tibetan characters seemingly being the ‘butt of the joke.’ Which is not something that I want to ‘laugh at.’

Slow start but worth persevering

Both author and narrator took a couple of chapters to get into their stride, I almost gave up in the first five minutes as the narration was so bad...but eventually things improved and I enjoyed the book immensely.

Steven Kynman narrated this book in such a way as to make it very enjoyable. A very funny account of the authors experiences in Tibet. Not the austere and bleak country you would imagine. Really good in my opinion.

This book will cheer you up !

This was a very well read, enjoyable tale. I would recommend to anyone for a light hearted fun tale.