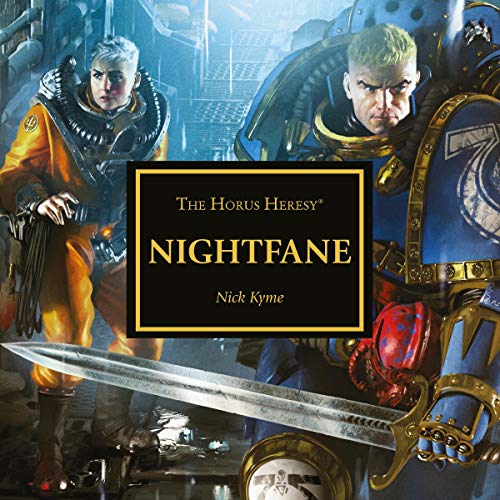 Arriving at a seemingly abandoned underwater rigging station on the moon of Bael, Aeonid Thiel and the Red-Marked discover a plot to devastate the 500 Worlds.... Can they stop it in time?

Listen because: Aeond Thiel returns! The rebellious Ultramarines hero and his Red-Marked guerrillas are the only ones who can save Ultramar.... Business as usual, then.

After the war to save Ultramar from the traitor hosts of Horus ended, formerly disgraced Ultramarines Sergeant Aenoid Thiel believes that enemies still linger within the borders of the empire. Finding other men of purpose, fellow Space Marines known as the ‘Red-Marked’, Thiel wages a guerrilla war to root out these enemies and vanquish them for good. Following the threads of a previous mission, the Red-Marked arrive on the moon of Bael. There they find an underwater rigging station that has seemingly been abandoned. But this place and its secrets could hold the key to the so-called ‘Nightfane’, a mysterious plot intended to bring about the destruction of Ultramar, and only Thiel and his men can stop it.

What listeners say about Nightfane

Awesome book to get into the 40k Warhammer world

When I first started getting into 40k I found this book and it really showed me the experience of being a ultra marine. Also the experiences they went through was described perfectly.