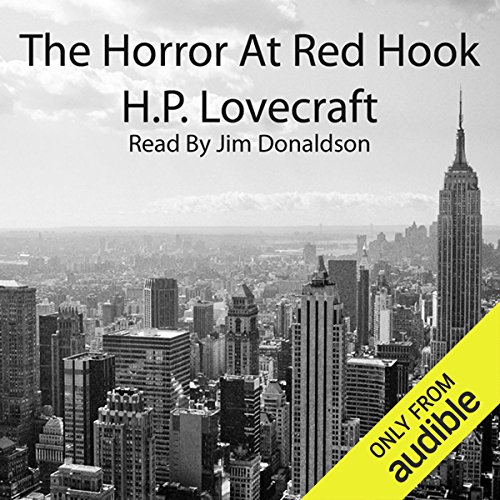 The Horror at Red Hook

The Horror at Red Hook

What listeners say about The Horror at Red Hook

Just a Bit of a Warning

I had no idea when I bought this that some genius had made the decision to add a background sound every few minutes to the narration. I could just picture some college kid they had paid in burritos in the sound booth, pressing various sound effect buttons and high fiving himself for his totally righteous editing skills.

But still! It's cheap and you could do worse.

The story isn't that bad, since it was written almost 100 years ago and kick started the modern horror genre. What really killed it were the sound effects that drowned out the words and the reading of the credits between each chapter. Audible should really be able to equalize the audio for the listener, instead of having us turn the volume up for the story and down for the sound effects and "commercial breaks". In the end, it felt like watching TV with way too many/loud commercials

The story is alright, but I couldn't finish as there was too much background noise/sound effects/music overpowering the narrator's voice.

The sound effects added to the story, but were sometimes louder than the narrator. Otherwise, a good story, well read.

Worth a listen, but not one of Lovecraft's best.

Would you consider the audio edition of The Horror at Red Hook to be better than the print version?

I feel for any narrator who has to read Lovecraft's wonderful but archaic prose. Jim Donaldson did a great job with it, though! I enjoyed his reading, and appreciated the addition of some musical touches and sound effects of moans and shrieks during dramatic moments. It really made listening to the story a better experience than reading it would have been. I will be looking for other horror works done by Mr. Donaldson.

From what I've read, this was one of Lovecraft's early works, and I think that shows. The story seemed to go on longer than needed. I thought that HPL's xenophobia was showcased more than usual in this tale, which was off-putting.

There are some good creepy scenes in the story, which I enjoyed.

After the end of the story, there is a short piece giving some background on Lovecraft and his influence on modern-day writers. I thought this was nicely done and appreciate the effort to show the significance of HPL's works.

Way overproduced, get ready for some noise

Far too much overuse of background noise, what could setup scenes if done in moderation is instead flooded with such loud stock sound effects as it floods out the narration, virtually ruining the tale.

I actually listened twice. It just didn't stick. I tried to concentrate on the story. Just wouldn't grab me at any point in time. Therefore I can neither agree it's a horror story nor can I recommend it.

A new favorite in the horror genre.

The narrator's voice perfectly matches the books story and creates an atmosphere of authenticity.

A great police procedural that discovers a horror beyond their imagination. This is a dated story with a fear of xenophobia noted, since the late author noted this in his writing. Great production and the narration is superb. The essay about the author’s life at the end was great as well.

An interesting way to spend an hour

In the past, I have seen & read biographical information on H.P. Lovecraft. His life was that of a loner and sheltered in many ways. He appeared to have some serious issues about those of different races & a definite distrust of those who were not Caucasian. I find this story to be interesting, but Mr. Lovecraft uses so many words ( was he perhaps paid by the word by the fanzines?). I can see how he was an inspiration to many of the writers in the genre that came after. This audio book had a good narrator, but I found the sound effects to be distracting. That was also a criticism of a friend who has medium hearing difficulties as well. All in all, the story if rewritten by Stephen King, Clive Barker or Neil Gaimon would definitely leave me wanting more. If one loves tales of the "Old Gods" with ancient rituals plus a close knowledge of Brooklyn past & present, this may be just the story for you.

A die-hard Lovecraft fan who appreciates the dramatics of sound effects accompanying a story.

What was most disappointing about H. P. Lovecraft’s story?

The prose was hard to follow in places - I found myself listening to several parts again just to keep up with the story.

Though the story was read well, the sound effects in the background were distracting and amateurish.

The end section of the audio book gave some insight into Lovecraft's life and his first steps into becoming an author, which was interesting and worth listening to.

While I understand that HP Lovecraft is well-renowned as a master of cosmic horror, this short story has not aged well. While the title promises a horror, Lovecraft gives a cult followed by immigrants with a clear racist agenda. Being my first Lovecraft story, I felt very underwhelmed and found myself wincing not at the supernatural evil but how dated I felt it was. It wasn't scary. It was dated and near offensive. Three stars for the performance because the narrator offers an chilling narration which is ruined by bad audio quality and the overuse of music at the start of each chapter. It felt that the audiobook could have easily been, at most, an hour and five minutes long if they cut all the musical cues and recalling of the title (i.e. "The Horror At Red Hook... by HP Lovecraft... Chapter 3")

It's Lovecraft. It needs more to be said.

As with Lovecraft this is brilliantly penned and crafted. A master of the craft of horror. A giant of his own and deservedly so. The production is very well done and the Narration is excellent. The atmosphere is perfect.

A Must for horror and takes of the unknown fans.

Can't believe that I've never come across this author before as Poe, Stephen King and Clive Barker are authors whose works U love to read. Maybe I have come across Minecraft but not realised in all of the Pan Horrors U read in my youth. Have now purchased the collection.

A shallow tale that chills but no more

The Horror at Red Hook is a slightly off field tale by the legendary H.P. Lovecraft that chills without exploring the raw terror of his more well known works. A non-Cthulu book, the short story slowly builds towards the creepy scares that H.P. Lovecraft fans know well.

The book is a good listen yet Lovecraft devotees may feel this is a weak addition to the genre, lacking the depth of his other books. This is very much a book of its era, where the author explores a perspective of race which most would consider unacceptable and xenophobic.

A tale of interest for readers of traditional horror but in no way a classic.

Terror at its best

This book kept me enthralled for a few days.Read mostly when I go to bed.being a bit of an imsomniac.I set my device to close after 30 mins of inactivity

Nice listen. I was looking for more in the characters - I wanted to know someone in the book, in detail - maybe that, is the mystery.

Highly entertaining and masterfully read by Jim Donaldson. H.P. Lovecraft. Is a master of spine chilling literature. I thoroughly enjoyed this book and if you like creepy stories, listen to this one. The bonus is the history of the authors life at the end. In all, a 5 star performance.