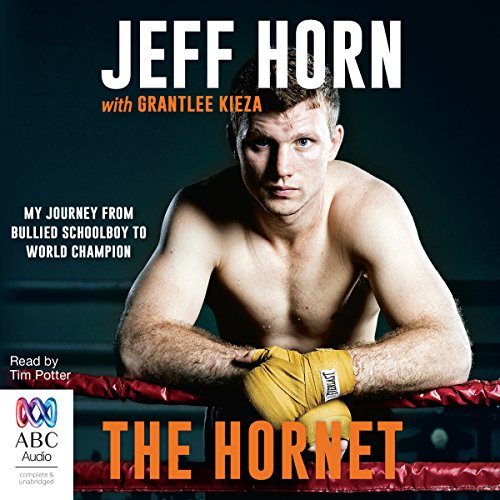 Jeff Horn's journey from a bullied schoolboy to world boxing champion - for anyone who has ever felt downhearted or like an outsider.

The story of Jeff Horn is like a fairy tale. Written with award-winning author, journalist and boxing aficionado Grantlee Kieza, The Hornet is the tale of a boy who, slapped around by bullies, saw through tears in his eyes a vision of himself as a hero, a champ, someone other people might one day look up to. Horn took up boxing after being tormented as a teenager. Fast-forward a dozen years and the former bullied schoolboy - now humble schoolteacher - became world boxing champion on 2nd July 2017 at Brisbane's Suncorp Stadium. The fight drew a record crowd to the stadium and a global audience of hundreds of millions, with Horn's victory over one of the greatest boxers of all time, Filipino senator Manny Pacquiao, one of the most incredible upsets in Australian sporting history.

But the fight was decided not amid the roar in the vast arena so much as in the chambers of Jeff Horn's heart, where the essence of his character lives with blood and fire beside his steel backbone.

Jeff Horn's journey to victory will resonate with anyone who has ever felt downhearted or dejected, anyone who has ever been an outsider. It's the revenge of the nerd, the rise of the geek, the coronation of the wimpy kid who once spent his lunchtime in the library to avoid the tough guys.

The now millionaire boxer's message is simple: never give up on your dreams, because if you push through tough times, amazing things can happen. Through his rise from the pit of despair to global sporting fame, Jeff Horn has proved to the whole world that anything is possible. Anything.

What listeners say about The Hornet

was very well put together. Jeff tells a relatable story and if full profile to motivation

Great book, from an honest hard working Aussie.
Jeff is a great role model for kids and people of all ages. What a champion!

A came across Jeff’s story while looking for a book about Manny Pacquiao. Pacquiao is one of my favorite champions in the sport of boxing, not just because he is a great boxer but because Pacquiao is a truly beautiful person on so many levels. The day that Jeff Horn defeated Manny Pacquiao I cried on the way home, I was devastated and experienced Pacquiao’s humiliation at the hands of this largely unknown Australian boxer. I ran into Jeff Horn at my local Telstra store in Garden City, Brisbane where we both were receiving customer service for our respective phone accounts. I told Jeff that he had defeated a god that day at the Suncorp stadium and he smiled. I was totally shocked at how humble and gentle Jeff was in real life. Jeff’s book, “The Hornet: From Bullied Schoolboy to World Champion” shocked me, an incredible story, well written and full of historical information in regard to the rise of this champion. Jeff Horn is not only a remarkable person but a true hero and light bearer for all those that have suffered at the hands of abusive and cruel bullies. This book is powerfully refreshing and stirs the soul to higher levels of motivation and creativity.