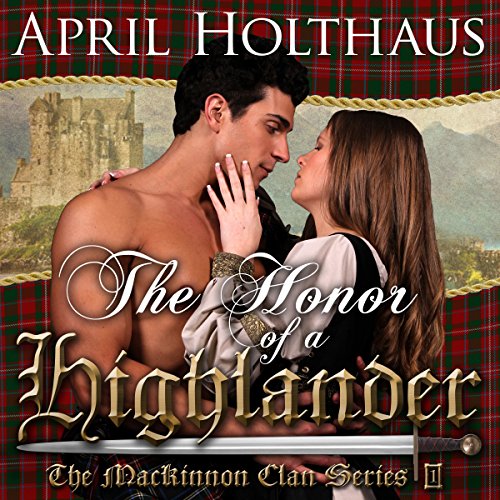 The Honor of a Highlander: A Novella

Laird Rory MacKinnon set out to join William Wallace after discovering an imminent threat that the English have planned an attack. Raised as a warrior, he has given his heart and soul to fight for Scotland's freedom, until he meets a lass who has captured his heart like no other, Lady Annella. After a brutal attack on her land, Rory discovers that Annella has been taken prisoner by the English. Now Rory must fight; not only to secure his own clan's freedom but to save the woman he loves.

Annella, the eldest daughter of the MacCallum clan vows to never marry, until the day Rory MacKinnon enters her life and opens her heart. Heading off to war, she knew they had no future. After her father offers aid to Laird MacKinnon and his men to help in their campaign, her castle is attacked and her father is killed by the English for treason. Starved and beaten for denying to pledge her allegiance to the English King, Annella has earned her place in the gallows. Her fate now rests in Rory's hands.

What listeners say about The Honor of a Highlander: A Novella

If you want to be put to sleep buy this book

I am a great lover of audio books. I have to say this is one of those that I was glad I fell asleep. So I read the book, the story was good but the audio version was not.

Would you consider the audio edition of The Honor of a Highlander: A Novella to be better than the print version?

I love both them both as an audio and a book!

What other book might you compare The Honor of a Highlander: A Novella to and why?

Which character – as performed by Melissa Carey – was your favorite?

Melissa was perfect for Annella's voice!

Yes, it was! It was great, fun and a delight to listen to!

What made the experience of listening to The Honor of a Highlander: A Novella the most enjoyable?

I normally do not listen to Female Narrators, but this lady Melissa Carey did an awesome job. I just sat and totally enjoyed this book. It was not monotone and she did well with the story. I will listen to this lady again, and read/listen to this Authors books.

It is action, romance, chivalry, funny, and lots more. I loved it from beginning to end. The characters are spot on.

What was one of the most memorable moments of The Honor of a Highlander: A Novella?

Melissa Carey makes it so much more interesting when she starts talking for the men. I was shocked, thinking I wouldn't like it but she did great.

Have you listened to any of Melissa Carey’s other performances before? How does this one compare?

No I have never listened to her before.

The book was great. The story line was good. You were taken on a wonderful ride and did not feel like a novella.

You will love this book

A fabulous, exciting and entertaining story

What made the experience of listening to The Honor of a Highlander: A Novella the most enjoyable?

What other book might you compare The Honor of a Highlander: A Novella to and why?

The MacKinnon's Bride His son was taken by the English. He goes to the castle where his son is being held, finds a girl in the river nearby. He holds her thinking he would make a trade. The captor releases his son but does not accept the return of his daughter. The Mackinnon then takes her top the highlands. On the way they realize they are attracted to one another.

The story teller did a great joy with the accents and her ability to change voices was fantastic.

Would you listen to The Honor of a Highlander: A Novella again? Why?

I would listen to The Honor of a Highlander over again. The story grabs attention from the first and holds throughout . There is laughter, happiness, sadness, romance, etc.. All the ingredients for a complete romance. This author takes the reader away and allows them to seemingly travel to the past and experience a different life!

I like all the characters. They all complete the story.

What does Melissa Carey bring to the story that you wouldn’t experience if you just read the book?

I also read the print version and enjoyed it as well. However the narration is great and adds to the excitement within the story.

I highly recommend April Holthaus books, either in print, kindle, or audio.

A captivating and beautiful love story.

Have you listened to any of Melissa Carey’s other performances before? How does this one compare?

Narrator Melissa Carey was outstanding. I will absolutely listen to more books she narrates.

A great highland story, with a tall, sexy highlander that will make you wish he could pop off the page and into your lap. This story has everything, conspiracy, intrigue, great historical reference and a sweet, tender love story, that melts your heart. Author April Holthaus has written an exceptional story. This is an absolute must read. I highly recommend this book and can't wait to read more stories from this author. I am definitely a fan of this author's captivating stories.

This was good for a quick brainless listen. It was action packed and sweet and it didn’t take a lot of thought, it was enjoyable to listen to while driving.

The only issue I had with this book was the narration was off from the kindle book. The story was great and I loved the writing.

There are many mistakes in continuity ...and the use of wording.
Even in a novella there should be more care given.

I loved the story it was very touching and good short read. The narrator did a fantastic job and I look forward to hear more books narrated by her.

Possibly the first published book for this author

If this is the first book published for this author I apologize for my harshness. Not worth a credit or purchase, both main characters were all over the place emotionally and there was nothing that all the other historical romances don't use as their main storyline, but this one added nothing interesting or humorous or anything. The whole time I was waiting for something interesting and it never happened.