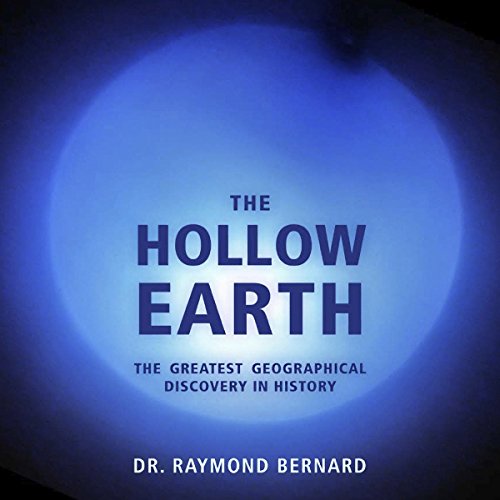 The Hollow Earth: The Greatest Geographical Discovery in History

New Saucerian proudly presents an official reprint of the cult classic, The Hollow Earth, first published by Gray Barker's Saucerian Press. This edition is an exact facsimile of the original, featuring several enlightening personal letters from the author, Raymond Bernard, PhD, to Barker - rare correspondence not found in other editions.

In this audiobook, Bernard claims that flying saucers not only exist, but that they are the vehicles of a super-race that lives in a huge, underground world, whose entrance is at the Earth's north and south poles. In essence, the Earth is really a fat donut, with little holes at the top and bottom. The seawater and geographical forms stay in place as the surface of the donut curves inward and upside down, held in place by gravity. (Not so kooky when you think about it.)

These "extraterrestrials" are actually our ancestors, and they are from the Inner Earth or Agharta. Admiral Byrd's epic 1,700-mile flight into the North Polar opening startled those privy to the information, leading to an official naval "hush up" of anyone knowing the truth. Those who "know too much" about flying saucers have been targeted ever since.

What listeners say about The Hollow Earth: The Greatest Geographical Discovery in History

There are references to other stories supporting this point of view, a contrary in point of you!

At first I thought my device was constantly backing up in the chapter. The information presented is repeated many times from different sources. The book is 1969 original copy write so some information is old. That being said. With an open mind and the interest in stories of the past to add to your knowledge base this is a good book. There were a few things that clicked with me that made interesting sense. One was the hollow earth dwellers spoke with a germanic accent. And that one of the openings is in Brazil. Didn't all the nazis run to Brazil after ww2? Just an odd observation. I don't believe in coincidence.

After having investigated many of the Dolores Cannon books I decided to check this subject out, as some of her subjects had mentioned underground cities. So I decided to check this one out. I'm baffled at how many 5 stars this book got when it is extremely extremely bad. I thought my player was broken and repeating the same things for hours. I saw previous reviews acknowledged this and that it got better so I skipped ahead and it was still awful. The author is convinced and tries to convince everyone, while bashing others as small brained who disagree, that flying saucers clearly come from inside the Earth and not possibly from other planets because..... he doesnt know how. In his words, only foolish children would think such, yet says he used to believe they were interplanetary. Until that is, he read some books that made him believe they come from inside the Earth. No good evidence to support anything whatsoever. All based on what others said or wrote about and how it seems, because animals have been seen going north during winter or other weak arguments. All is essentially based on Admiral Byrds diary. Beware of any author so overly confident, without any experiences of his own to support any claims. It's just absurdly bad content and the narrator sounds like he was exhausted with reading this. I know I would've been. Don't waste your time or money. Returning it.

I tried! The story interests me and I want to follow the Hallow Earth conspiracy but this narrator killed it for me! So monotonous. Sorry but I will be claiming my credit back.

There are so many mysteries about this planet the Nazca lines the cave paintings the giants that are buried all around the Earth why not have a hollow Earth where people are living that are advanced beings? I say it's great fun to speculate, because after all, who knows really?

I really enjoyed The Hollow Earth. The theory does have some very interesting and valid points that until today, are kept in secrecy. I definitely recommend The Hollow Earth audio book to everyone.

It's hard to get much information on this subject. Therefore, I'm grateful that this half-century-old book was made available.

Hollow Earth is one of my favourite subjects but this book would scare away even a newbie to the study.

The book should be about one hour long based on the information it contains, but due to the amount of repeating it's drawn out to several hours. In addition, a combination of structure and narration make it feel even longer still.

Most sentences start the same way and spoken in the same time. The narrator sounds like he has absolutely no personal interest in the subject and is just reading from the book.

Very frustrating and dreary to listen to. Would not recommend.

Totally blown away by the attention to detail in locations, people, biblical insight and government meddling on one of my favourite conspiracy theories. Although after this book I whole heartedly doubt it to be a theory.
I first noticed the strangeness when I began to follow a ship and crew that wanted to discover the entrance and take tourists but I received emails explaining the trips and ship have been shut down and crew were harassed by the government. At that time I felt it was a interesting and my favourite conspiracy. Many years on I came across this book and it has resparked my interest.