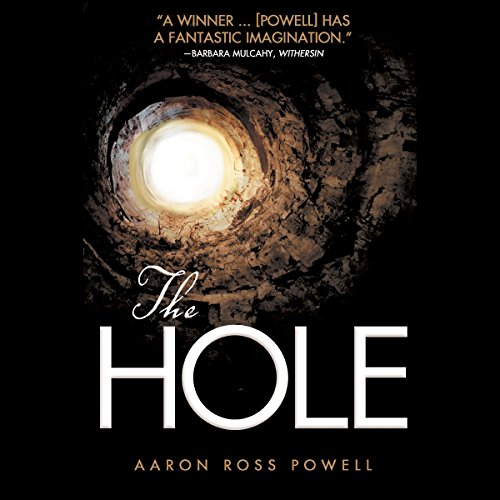 A horrible plague has decimated the entire world and killed millions of people, and Elliot Bishop and Evajean Rhodes are called to leave their Virginia home to travel to Salt Lake City. On the way, they realize the full extent of the plague's damage, fight zombies and monsters, and come to understand the religious implications behind the plague. Mark Boyett enhances Aaron Ross Powell's post-apocalyptic tale with a remarkable and insinuating performance. The alluring and evocative huskiness to Boyett's voice creates a sustained atmosphere of creepy intrigue throughout The Hole, making for a compelling and provocative listen.

The world, as Elliot Bishop and Evajean Rhodes know it, is gone. Destroyed. In just two weeks, a horrific plague raged across the planet - driving its victims insane before killing them.The two survivors set out on an unimaginable journey, driven by a cryptic message from Evajean's husband: If anything terrible happens, you must get to Salt Lake City. But the pair soon discover they are not alone, and that the plague has done more than kill.

The countryside between Virginia and Utah now crawls with victims who have been driven mad - violent lunatics fueled with definite yet unknown purpose. To survive, Elliot and Evajean must fight for their lives - against the crazies, against sinister forces who would stop their quest, against long-ago hidden menaces - and uncover the deeply guarded secret of those driven mad and the plague that spawned them. It's the secret of a destructive force unleashed on the world by one of America's most powerful religious sects.

What listeners say about The Hole

First, just a word of warning: this story might not be appreciated by those who believe religious history is 100% factual, especially Mormons, but also other Christians. It will probably best mesh with the point of view of those who are no-longer-religious former Mormons. But it should still be an enjoyable adventure/suspense story for most everyone. I personally found the story quite interesting, although a bit disjointed in places. It could have used some smoothing out in some places and some expansion in others, but overall, the story was very interesting -- a nice twist on the recent flood of zombie novels. Some of the parts, such as the caves under Nahom or the well in the tunnel in the basement, were astonishingly nerve-wracking to listen to, and reminded me of the Mines of Moria scene in the the first Lord of the Rings film (which I found a great deal more thrilling than the same scene in the book).

Kudos to Mr. Powell for a job well done. I'll be eagerly awaiting his future books!

What would have made The Hole better?

SPOILER........I did not mind the inclusion of the twisted Mormon influence in the story, this was in fact the only interesting twist in the book. I did not mind the mythological storyline of how the people became possessed (NOT ZOMBIES). What I hated about the story was the character's dialog, the lack of character building, and the LAME and UNREALISTIC decisions they made during their journey. The ending was abrupt and made zero sense. Not enough action. Confusing story.

Would you ever listen to anything by Aaron Ross Powell again?

Depends on the topic

What character would you cut from The Hole?

Should have saved my credit!

Escaping the zombie-like death and traveling 3/4" of the way across America our heros face amazing encounters with friends, not-friends and everything in between. Not the best story but good enough to enjoy for a couple of hours. If you are sensitive to the criticism of religion you should avoid this book, The narrator flawlessly contributes his talent to this production.

This entire sub-genre of apocalyptic fiction is extremely hit or miss so I approach each book with very low expectations. This book is one of the better recent examples of a good apocalyptic tale that pulls from many inspirations (The Cell, I Am Legend, George Romero's The Crazies, etc) without being derivative or amateurish. I found it to be a compelling read start to finish. Thankfully the author does not feel compelled to inflate his word count. For this sub-genre of apocalyptic fiction it seems many authors are compelled to write 800 pages to tell a 300 page story. The book is short and well paced. A good quick read that covers a lot of territory.

Ugh. Did I miss that this was about Mormons?

I don't see how you would improve this story for me. You get about half way through and suddenly there are Mormon zombies everywhere.

Not what I expected but interesting

The time listening was well-spent. Simply because the story was interesting. Although the story was a little on the slow side there was a lot going on and it definitely had a sense of mystery. You didn't know exactly what would happen and when you thought you did, the unexpected happened. The wrap-up at the end of the book took me by surprise because the explanation about the whole mystery wasn't at all expected, but at least the conclusion made sense.

Would you recommend The Hole to your friends? Why or why not?

Although a little rushed, the ending scene was my favorite because of what it represented. (Being cryptic here so as not to inadvertently give spoilers.)

Do you think The Hole needs a follow-up book? Why or why not?

There is room for a follow-up and the ending would allow that. For those people who really enjoyed the story, I'm sure they'd want a follow-up book. More answers could be provided and as mentioned, the story was interesting so there is the potential for more material that could hold one's attention.

This was a true chore to finish. It starts out like many zombie apocolypse books - two survivors struggling to get to safety in a world destroyed by a devestating disease, etc... Things begin to get a little strange ( stranger even than a zombie apolcolypse) so it seems there is some mystery going on that they must solve. So far so good, right? Wrong. THe characters are incredibly flat and uninteresting and barely developed, so the plot is all that is holding this book together... Then comes the religion and the second half of the book is some long winded religious babble, taking on mormonism and spiraling into religious mythology and babbling on about religious visions of creatures from hell, etc.. Really not interesting and a very boring turn in the plot. If you are a mormon you will likely be offended. If you aren't religious, you will likely be bored to tears. If you are religious, you can certainly do better, I think, as this was at best silly and at worst very scattered in its story, unoriginal and dull. The story tries to conclude by drawing on the two main characters, but there is nothing that makes the reader feel at all attached to them as people or particularly compelled by their mission so it is really hard to care or be at all moved by the ending.