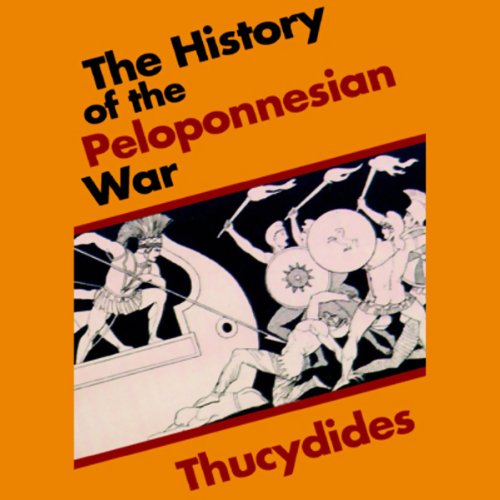 The History of the Peloponnesian War

By: Thucydides
Narrated by: Pat Bottino

The Peloponnesian War broke out in 431 B.C. and continued intermittently for 27 years. It pitted the all-powerful land force of Sparta and its allies against the supremely powerful naval force of Athens.

Thucydides actually participated in this conflict, a war that he realized would have a greater influence on the history of Greece than any other. The History of the Peloponnesian War is true to its title; it is a story of battles and sieges, of alliances hastily made and soon broken, and, most importantly, of the behavior of people as the war dragged on and on - of the inevitable "corrosion of the human spirit".

Thucydides, whose passionate desire to record the truth is clearly apparent, vividly narrates exciting episodes and carefully describes tactical aspects of the war. He also provides illuminating character profiles. Few will argue that Thucydides was not the greatest and most exciting historian of antiquity.

What listeners say about The History of the Peloponnesian War

If you are going to read/listen to Thucydides, might I suggest listening to this wonderful audiobook while reading the Landmark version. There are so many places, people and changing loyalties that it really helped having the notes, maps, etc. I love the classical beauty of the Crawley translation and Bottino does a stellar job at narrating this amazing work. While I'm not one to demean anyone, I would simply suggest that the difficulties in narrating Thucydides is ORDERS of MAGNITUDE beyond most contemporary fiction or history. Narrating this book must have been a beast, and Bottino is my hero for doing such an impressive job.

For me, there is not much better than Thucydides' speeches. "The Funeral Oration of Pericles", "Diodotus to the Athenian Ecclesia", "Demosthenes to his troops at Pylos" & "Nicias before the last sea fight" are all some of the most interesting, moving and inspiring speeches and harangues ever written.

This book is a must for students of the classics, politics, history and war. Hell, even if you are just interested in a good story, Thucydides tells a mighty good one. This is an amazing, beautiful and important piece of history.

The beginning of modern history

Many of the names of people and places mean nothing, and some of the accounts of the military actions are dry, but the fascinating part about this book is its modernity. It is not just an account, it is a critical analysis of the wars.

There is no glorification of particular heroes and no divine explanations of events. Thucydides was detailed in his accounts of all sides in these wars and in his analyses of their actions. He pointed out strengths and weaknesses in politicians and soldiers on both sides. He used multiple sources, as well as his own experiences. He analyzed quite critically the reasons for the wars and various actors' deeds, dismissing, with explanation, those rationales he found unsupported. Although an Athenian, he leveled his insight equally on both the Athenians and the Spartans.

His critical approach and cogent analysis bring the ancient atmosphere to life and make the ancient Greeks seem real.

Thucydides richly earned the title of the first modern historian.

Got Me Past the Greek Names

I tried to read this years ago and got bogged down in the Greek names. Somehow, it is easier to "hear" than to "see" them, and this long but informative narration made it so much simpler to understand for me. Carefully attend to the politicians' speeches. They are frighteningly modern in their rhetoric, so human nature has not changed much in a couple of millennia. I think everyone involved in war, public policy or history should read this.

This is another very old history. It is military history, so if you like military history that dates back to the time when advanced warfare included scaling the city walls and strengthening your oared ships to ram each other better, you should love it. Otherwise, it is a dry drag.

Thucydides was a general for the Athenian side during the early part of the war. Apparently, he was captured and held in or near Sparta for part of the rest of the war. He says the war lasted for twenty-seven years altogether, but my copy of this recording ended at the end of twenty-one years. I am not sure if this is because my copy is defective, because the producers intentionally cut it off there, because the translation only goes that far, or because Thucydides only got that far with his writing. Anyway, I never did find out who won. However, I suspect it doesn’t matter much, because for the first twenty-one years of the war the upper hand kept passing back and forth between the Athenians and the Peloponnesians, and people were getting killed at a steady rate, their fields and ships destroyed, and all their money used up or stolen. If they didn’t basically fight to a draw, whoever won must have been left masters of a lot of broken walls, empty fields, and widows and orphans.

Thucydides makes some interesting observations at the beginning of the history, however. He hypothesizes that for generations before the war wandering groups of people had been fighting back and forth over the entirety of Greece, everybody fighting for the best fields and pastures. He speculates that this fighting was more common in the Peloponnese because they had more fertile fields there. Attica, where Athens is, on the other hand, was somewhat less fought over because the land there wasn’t as good, so its population was more stable. Being closer to the sea, they went in for shipbuilding and fishing and the like, and by the time of the war, their chief occupation was piracy. Apparently, everybody was a pirate.

So, in the Peloponnesian War, there was a big land power fighting a big sea power. They dragged in all their allies, and every colony – which means every town and island in the place – rebelled against whichever one of the combatants controlled them, one or two at a time. This is another case where having the audiobook was in a way a detriment because there is no way to keep up with all the little places. A map would have been nice. And I can’t talk much about who did what to whom, because there is no way I could spell all the names. So, I am very grateful to the narrator for getting me through all that – although it sounded like he had some trouble with all the Greek names too.

It is what it is - the full account of the war as written by Thucydides.

I can only really review the audio presentation of this book. It's decent enough, although could have done with a little more "charisma" from the narrator. Listening to the samples of both unabridged versions available, I wonder if the other is slightly more engaging?