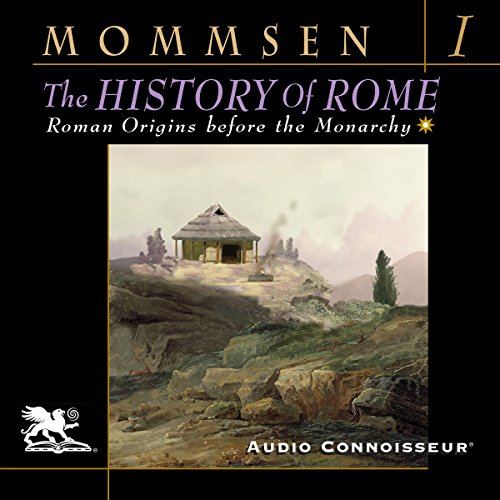 The History of Rome, Book 1

Roman Origins Before the Monarchy
By: Theodor Mommsen
Narrated by: Charlton Griffin
Series: The History of Rome, Book 1
Length: 11 hrs and 1 min
Categories: History, Europe
5.0 out of 5 stars 5.0 (1 rating)

The History of Rome, Book 1

In 1902 the Nobel Prize for Literature was awarded to Theodor Mommsen for his sensational work of history The History of Rome. Classical scholar, historian, jurist, journalist, politician, archaeologist, and writer, Mommsen is generally regarded as the greatest classicist of the modern era. To this day his work on Roman history is still of fundamental importance among scholars. There has never been anything like it, and there may never be again.

Mommsen's history, first appearing in 1856, differs from the 18th-century work of Gibbon in the important respect that Mommsen begins his story in the centuries before the monarchy and ends it with the death of Julius Caesar. It is a dramatic historical tour de force of Republican Rome. (Gibbon takes up his work where Mommsen leaves off.)

The History of Rome is divided into five books, of which this is the first. Book 1 begins in the dim prehistory of Latium and describes the society that emerged there in the centuries leading up to the establishment of the first Roman king. This penetrating look at emerging Latin culture takes us into the strange world of their religion; their family structure; and their legal system, trade, alliances, and relationships with neighboring tribes and kingdoms. It brilliantly sets the stage for what is to come in the following volumes.

"Mommsen wrote a great book, which certainly will always be reckoned among the masterpieces of Western historical literature." (Arnold J. Toynbee)

What listeners say about The History of Rome, Book 1

Finished Book One of Five in Theodor Mommsen's History of Rome. Despite its 19th Century language and the sheer depth of detail, Mommsen's ability to tell an interesting story despite the preponderance of detail keeps the story engaging enough to want to continue the series. Great for very long walks with the dog.

The subject matter is always interesting to me, and I thought I would experiment with reading one of the older titles. Mistake. The writing itself is ponderous, pedantic, and woefully biased. Worse, the narrator (while doing a good job with the material at hand) sounds a lot like Winston Churchill. After a few chapters I couldn't take it anymore, and gave up.

This book covered a number of subjects about literature, art, etc. Not really my cup of tea, but still a good book.