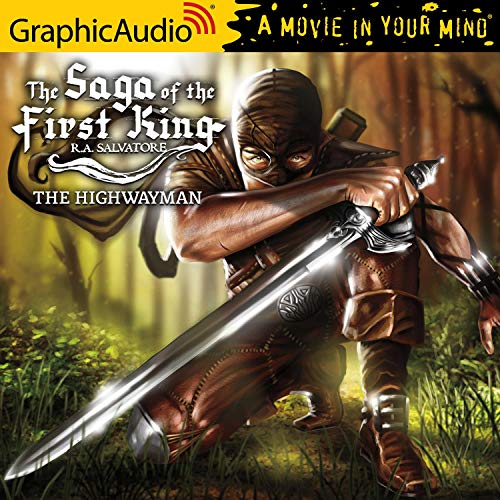 It is God's year 54, many years before the Demon Wars, in the land of Corona. The roads are unsafe to travel; goblins and bloodthirsty Powries search out human prey. Two religions struggle fiercely for control. Bran Dynard, a monk of the fledgling religion of Abelle, returns from his mission in a far-off land with a book of mystical knowledge and a beautiful and mysterious new wife. But he soon realizes that the world he left behind has changed, and his dream of spreading the wisdom he learned to his fellow monks is crushed. Forced to hide his wife and his precious book, Bran must decide whom he can trust and where he should now place his faith.

Twenty years later, the situation has grown darker and more desperate. Only the Highwayman travels freely, his sword casting aside both Powries and soldiers. The people need a savior, but is the Highwayman on a mission of mercy...or vengeance?

What listeners say about The Highwayman [Dramatized Adaptation]

I recently came upon these books, or rather narrative movies, while trying to find what to use my credits on when I stumbled across the curious header. "Graphic audio - a movie in your head".
It is just that, as long as you have a good author.
I looked for an author I was familiar with and I gleefully downloaded the first one I saw.
Theyre amazing for someone like me with ADHD where I can listen to this "movie" and get my work done at the same time.
Audible makes it easy for me to go back a couple minutes if I get distracted, too.

I own the audiobook of the original version already, but this one was so worth it! I need the rest now. And now they said that The Warded Man is also dramatized? Oh, man, I’m going to need another job at this rate!