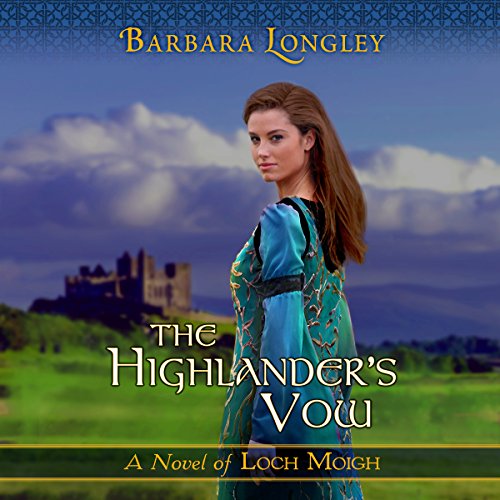 On the eve of her wedding, Sky Elizabeth, the earl of Fife's eldest daughter, learns of her betrothed's murderous plot against her. As she flees, Sky falls through a mysterious portal in time, landing at the feet of a twenty-first-century American knight.

Struan, the bastard son of the earl of Sutherland, escaped death through time's portal once. Recognizing what has befallen the frightened woman, he vows to protect her even while Sky, with a trace of fae blood in her veins, senses his resentment.

Despite their growing attraction, she's determined to find a way home to avert a clan war. Though he cannot deny his desire, he fears that helping her return to the past will surely lead to his demise. As the two work together, passion ignites and an unbreakable bond forms - but will it be enough to sustain them through the perils they'll face in the past? Can their love have a future?

If you’ve listened and enjoyed the first books in this series you will be delighted to revisit some old friends in book 4. I enjoyed the story of Sky and Struan. Their romance, despite the challenges, was touching and very sweet. The author did a nice job showing the many difficulties and struggles while living in different centuries.

This book can stand alone but I don’t think it would be as enjoyable without the background of the other books. There are no cliffhangers but the story’s intertwine by their time travel experiences.

I thought the narrator did a really good job. I liked his voice. Some of the reviewers didn't... so please listen to the Audio Sample before purchasing.

Also, there is some Adult sexual content….. so for those who prefer clean romances you might want skip this one. ;-)

Barbara Langley writes a good story, but she could improve on her sexual encounters. Shelley Thacker is the best there by painting beautiful scenes with colorful descriptions. Use of words like "clit" and nipple and such are a real turn off and mood breaker. Otherwise, it was an enjoyable book and look at life in the past.

I love this book. It was so great a sort and kept me captivated til the end.

One of the best series I have listened to. I truly hope there will be an addition to it.

Be still my heart

In the fourth book of this amazing series you finally see Sky's story. We first learn of her in the first book and get glimpses of her until the third story where she has a bigger presence. She has grown into a fine strong woman and I have so much attachment to her. Struan is also a strong character and his internal struggle and love for Sky is wonderful to read. I have so much love for all the characters and to see them grow and know what happens to them makes this serious one of my favorites. Barbara out did herself in this book. All that is left wanting is Tieren's story.
The narration is wonderful as well.

Barbara, what an amazing story, a story about going into the past or future and finding love and new adventures. Luke Daniels is my favorite #1 narrator he makes me close my eyes and relive storytelling with his amazing talent thank you !!! .. Thank you for letting my imagination go wild and think that maybe the car next to be is someone from the 15th century...

Absolutely Loved It. Easy to follow . A great plot. I'm very impressed by the author's attention to details in the difference in the time periods variating by the centuries in Scottish history. its a rarity to find. I'm enjoying the whole series.
The narrator is terrific easy to follow very enjoyable to listen to.

Love this book. It is a keeper. The all around adventure, love, and family ties was great and heart felt.

Such a time in history for a Scottish miss where her life is not her own to plan. Isn't life strange when in her time of peril she is dumped into a whole new plan not her own. It's a delicious romance with all new perils.

I listened to the audiobooks for the previous three books, the third having the best narrator. This new narrator put me to sleep but I wanted to finish the series so I read the Kindle version instead, which was very good.