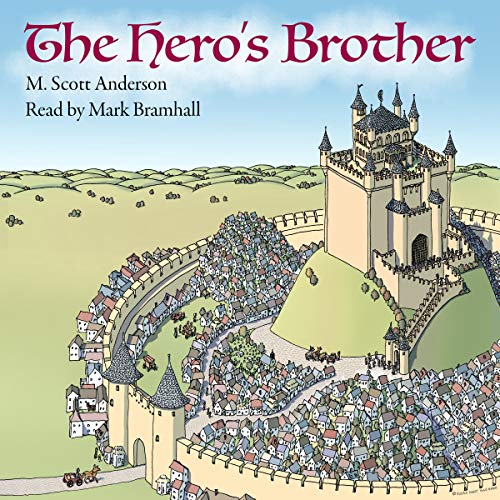 It’s hard enough being barely above average when your brothers include the deadliest swordsman of the realm, a saint, prodigies - and the greatest hero of the Middle Ages. But what if you haven’t seen your queen of love in years and she's imprisoned by a one-armed religious zealot and lethal librarians? Even worse, your only allies are vicious killers with rather bad manners and outsized appetites who all want to murder your heroic brother.

The result - in a world of pedantic misrule, feckless magic, and courage both dauntless and daunted - is either high adventure or an identity crisis. Or both.

What listeners say about The Hero's Brother

An impressive voice in historic, imaginative fiction literature. The writing is exquisitely beautiful, the characters are both heartbreakingly sad, and joyous in their triumphs and sorrows. Very poetically versed, transforming the reader into another era all together. With all the greed, lust, vanity, deceit, love and artistic freedom - this tale that is enormously entertaining, deep and fascinating, magical.

What fun. Written with wit and style, this epic was delightful from start to finish. Masterfully written by Anderson and performed with finesse by Bramhall, I will be looking for more by both!

The audio version was incredibly helpful to me since it was efficient for me to listen to it in the car or while doing errands around the house! The audio version had a very engaging speaker with good voice inflection and cadence, which always kept me on my toes!!! Overall I loved the use of colorful language to paint a whimsical story of a boy who is persistent and brave enough to keep moving forward despite the challenges he encounters

Not everyone can become a great artist, but a great artist can come from anywhere,this is something I’ve come to understand from this book , because of the quest for fame and everything there needs be ,I recommend this book to anybody who wants to understand major things about humanity and the spiritual ,I will be waiting for the printed versions ,this is good . I’ll be reading most of the time again .mind boggling, hats off

Extraordinary detail in this adventure

Quite a tale imagined and told. What an adventure of hilarity. Took me back to a time way in the distant imagined past. The underdog wins tremendously. Titled perfectly. Literary art. Looking forward to a movie or play to see the characters and story brought to life.

I enjoyed this book very much.
It felt like the hobbit meets the alchemist! Great audiobook indeed.