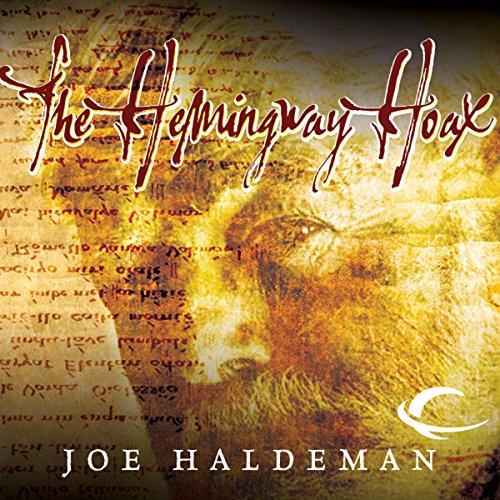 The hoax proposed to John Baird by a two-bit con man in a seedy Key West bar was shady but potentially profitable. With little left to lose, the struggling, middle-aged Hemingway scholar agreed to forge a manuscript and pass it off as Papa's lost masterpiece. But Baird never realized his actions would shatter the history of his own Earth - and others. And now the unsuspecting academic is trapped out of time - propelled through a series of grim parallel worlds and pursued by an interdimensional hitman with a literary license to kill.

"A dazzling entertainment that builds to an astonishing and moving conclusion." (Peter Straub)
"Haldeman at his best: fast, literate, suspenseful, and mordantly funny." (San Francisco Chronicle)

What listeners say about The Hemingway Hoax

The book is a good listen, but it takes a while to develop. An interesting story and a little hard to understand and follow characters at times.

I wish this were the author's initial draft, not the final product. The premise is charming, and the level of detail about Hemingway and his writing is tantalizing, but thin. The unexpected multiple-universe plotline is Douglas Adams-esque, and adds to the novella's potential. But it gets weighed down by a hefty slice of unnecessarily detailed sexuality; the kind that makes you think "that's what a 15-year-old boy probably hopes women are like." If the same level of detail went into the intricacies of the plot twists, alternate universes, and Hemingway lore that went into the sex scenes, and the sex scenes had the same level of detail as the plot, universes, and Heminway have, this would rate a 5.

Ok but not one of Haldeman's best

I have liked all of Haldeman's books so far, but this was not on par with the ones I have read. It was to far fetched without being able to explain itself. to many things were left unexplained.

I was unfamiliar with this author's work, but the sale price was tempting, and I gave the book a try. I was pleasantly surprised to find an engaging and clever tale with a science fiction approach rather than the straight literary angle.

The only oddity I noted was when the reader mentioned "the belt buckle with Gott Mit Uns," and the pronunciation seemed to blur the words together into "Got mittens?" It took me a moment to realize what it actually was, and I dismissed the mental picture of a kitten seeking his lost mittens. I listen to my audio books on the fastest setting, but usually this doesn't change words in this way.
Otherwise the book is perfectly satisfactory, and one I shall listen to again. As a novella, it's suited to trips of modest length, though I wish it were full length, as I really did enjoy it.

A waste of time

One of the few audiobooks I actually deleted from my hard drive, mostly because there was no clear justification for the sex or violence.

not the right book

The audio book is not the same as the book they sell on Amazon. The first six chapters are good but then you get to the seventh chapter and it does not continue the story

What did you love best about The Hemingway Hoax?

The combination of historical Hemmingway information and time-travel/multi-verse ideas was incredible. Science and suspense at the same time .... loved it.

What other book might you compare The Hemingway Hoax to and why?

Not especially; mostly just a very good read, some wonderful surprises at the end, and some hard thinking needed to keep up.

Listen carefully, pay attention. Some of that stuff at the beginning matters at the end!

While on vacation in Key West, John Baird, a Hemingway scholar, meets a conman named Castle in a bar. After telling Castle about Hemingway’s missing manuscript, Castle suggests that they forge it and make a lot of money. Baird refuses, of course, but Castle enlists Baird’s wife Lena and the two of them talk John into creating a forgery. Under pressure from his wife and his rapidly dwindling finances, John goes along with the plan but, unbeknownst to his co-conspirators, he makes a backup plan to protect himself in case of detection. Meanwhile, Lena and Castle are working another angle and the stage is set for betrayal, adultery, and murder.

Up to this point, Joe Haldeman’s short novel, The Hemingway Hoax, is a thriller, and it’d make a great movie. But Haldeman throws in a science fiction element involving Hemingway’s ghost, time travel, parallel universes, and metaphysics that will probably disappoint some readers because the hoax scheme was compelling enough without it. When the strange stuff starts, the focus of the story changes from the hoax to the parallel universes and readers who were hoping to see John create and publish a successful forgery will be disappointed.

However, fans of the Weird will appreciate the PKD-style deviation from the expected course of events, though they would probably like a few more explanations, including one for why each alternate universe John inhabits gets more violent. (The obvious explanation is simply that it increases the reader’s tension and allows Haldeman to add some explicit sex and violence scenes). Some readers will probably be irked that Haldeman is vague about why John Baird has certain abilities in parallel universes or exactly how Hemingway’s writings are so vital to the omniverse, but I enjoyed thinking about this possibility and the effects that literature could have on world history.

The Hemingway Hoax suffers slightly (at least from my perspective) from a lack of likable characters. At first it’s easy to appreciate John Baird, a mild-mannered academic who really wants to do the right thing. Later, though, we’re disappointed to learn that he’s just as willing to betray his wife as she is to betray him.

Overall, The Hemingway Hoax is entertaining if you go in knowing to expect it to turn weird and, eventually, gory. A shorter version of The Hemingway Hoax was originally published in 1990 in Isaac Asimov’s Science Fiction Magazine edited by Gardner Dozois and it won both the Nebula and Hugo awards for best novella. I listened to the audio production created by Audible Frontiers which is 4.5 hours long. It’s introduced by Joe Haldeman and excellently narrated by Eric Michael Summerer.

I think this audio book does the story justice,

It's a good story, which will get you think about reality, if you're that way inclined. The ending is as confusing as the end to 2001.