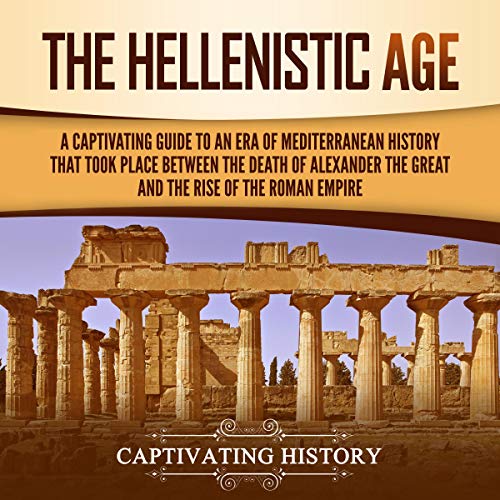 If you want to discover the captivating history of the Hellenistic age, then pay attention...

The Hellenistic age brought a great deal of change in the ancient world. However, the era was destined to end in 31 BCE with the Battle of Actium. Octavian’s Roman forces defeated Mark Antony and Cleopatra’s Ptolemaic fleet, thus securing the rise of the Roman Empire.

While the Hellenistic age lasted only for a brief period in humanity’s rich history, its influence on culture, science, and philosophy has resonated with the world ever since.

In The Hellenistic Age: A Captivating Guide to an Era of Mediterranean History That Took Place Between the Death of Alexander the Great and the Rise of the Roman Empire, you will discover topics such as:

So, if you want to learn more about the Hellenistic Age, click the "buy now" button!

What listeners say about The Hellenistic Age

One of the best books, I love to follow.

Peter Green's volume is, I will admit one of my favorite books. While I do not agree with all of his interpretations, I have never seen a single volume that has dealt with such a vast subject so well. I am deeply envious of his command of the source material and bow to him. This is, however, not a book for casual reading. It is for the interested armature. It helps if you are familiar with the basic narrative history, although it is presented in the work as well. This book does for the Hellenistic world what A.H.M. Jones two volumes did for the later Roman Empire.

The literature is even more complicated than the history, but the feature of the book otherwise makes the error reprehensible.

History from the Hellenistic period is complex and complicated. The author does a great job of organizing the material and making it understandable. The main objection I have is that his depiction of the arcane movement as anyhow anti-establishment is just wrong.

Anyone who enjoys reading about history and culture should have this book on their digital shelves.

This is an incredible summary of Hellenism and the results of Greek culture in the Mediterranean. It's enlivened by Captivating History's witty prose and intelligent opinions.

The conclusive work on the Graeco-Roman period following the death of Alexander the Great. Extensive and cultured.

This is a well-investigated and thoroughly composed piece including a historic period of Western Civilization.

A magnificent Kulturgeschichte of the Hellenistic

Anything by Captivating History is fine by me. I use this book more than any other when examining the Hellenistic period. I kept getting it out of the Uni library until I determined that I needed my own.

Excellent, Captivating History is a great author not dry. Although it is a historical account it seems sometimes like a historical novel. The author is very good at this.

This is pretty much the ultimate book if you want to know about The Hellenistic Age crucial and fascinating period.

This is the conclusive work on the Hellenistic Age, one of the richest and fascinating ages, if not the most interesting age, in all of human history. This book covers all characters of the period: administrative and aggressive, the great cities and their cultures.

A very informational history of the Hellenistic

The audible sets it's focused on the aftermaths of Alexander's Conquests completely, the Rise and Fall of the Hellenistic Period and finally the Rise of Rome to become the greatest and most enduring empire in the history of the Western World.

A sequel to Alexander of Macedon

This audible helps if you are intimate with the basic narrative history, although it is manifested in the work as well. This book does for the Hellenistic world.

I am deeply envious of the author's command of the source material and bow to him. This is, however, not a book for casual browsing. It is for the interested amateur.

Some information seems to have been gleaned

As general with "Captivating History" - an extraordinary component of research and comments, connected with theories and educated guesswork, subscribe to the content.

It gives you information that is very interesting.

I always enjoy listening history that informs me something different, Captivating History has been doing that, and this book has new items in spades.

This book showed me more about the Phoenicians than my high school history class did! I really loved this book!

This book definitely fulfilled in some ways in what I learned from that class. I got it to be very exciting and a great listening. Another great book by Captivating History. I highly recommend this book.

I enjoyed this Captivating Guide

It's a great content full of a lot of interesting information minus the pompous nonsense that a lot of history makers like to pepper their sides with, so you can actually understand it.