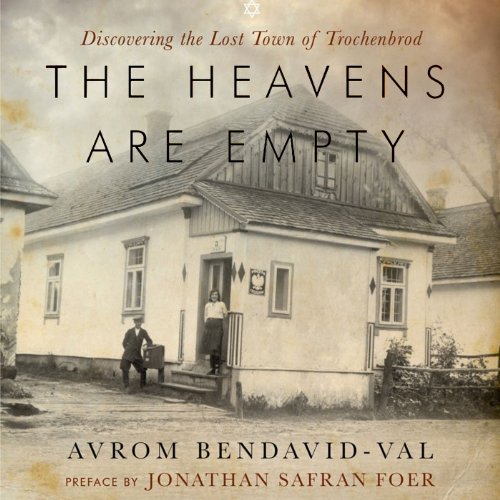 The Heavens Are Empty

The setting for Everything Is Illuminated, Trochenbrod was the only freestanding, fully-realized Jewish town in history until its destruction in 1941. A descendant of one of the original inhabitants of Trochenrod, Avrom Bendavid-Val spent 12 years researching and collecting stories about this fabled village, which was founded by Jewish settlers escaping the oppressive policies of the Russian Czars. Narrator Marc Cashman's perceptive performance lends a solid earthiness to the magical feel of this village set deep in the Ukrainian forest. Listeners will be quietly moved by the wistfulness permeating his voice as he recounts the personal recollections of Trochenbrod's former residents and neighbors.

A magical place, a lost history: Trochenbrod, the setting for Everything Is Illuminated , is now rediscovered for a new generation.

Trochenbrod was the only freestanding, fully realized Jewish town in history. It began with a few Jewish settlers searching for freedom from the Russian Czars’ oppressive policies, which included the forced conscriptions of one son from each Jewish family household throughout Russia. This scene of ethnic harmony was soon shattered, as Trochenbrod vanished in 1941 - her residents slaughtered, her homes, buildings, and factories razed to the ground.

Yet even the Nazis could not destroy the spirit of Trochenbrod, which has lived on in stories and legends about a little piece of heaven, hidden deep in the forest.

What listeners say about The Heavens Are Empty