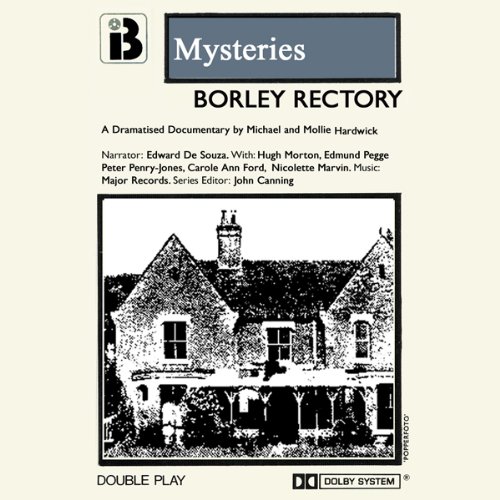 The Hauntings at Borley Rectory (Dramatised)

Hunker down with some hot cider and make sure you've left your night-light on before pressing play on this spooky audiobook! The Hauntings at Borley Rectory, written by Michael and Mollie Hardwick, is a chilling full-cast dramatization starring Edward de Souza, Carole Ann Ford, Nicolette Marvin, Hugh Morton, Edmund Pegge, and Peter Penry-Jones, who recount in a wholly haunting performance the tales of those ghosts who once haunted Borley Rectory, in Suffolk, England, a building which was destroyed by fire in the mid-20th century.

The voice actors in this stunning ensemble cast throw themselves fully into this intense and deeply affecting dramatization - don't be surprised if you end up with goose bumps!

Borley Rectory in rural Suffolk seems to have been plagued with ghosts, particularly that of a young French nun believed to have been murdered on the site. Dark and malevolent shapes, poltergeist activity, and voices from disused cellars and stairways haunt this recording. Borley Rectory burned down in the 1950s - and so did the studio where this eerie reconstruction was recorded.
©1979 Michael, Mollie Hardwick (P)1979 Ivan and Inge Berg

What listeners say about The Hauntings at Borley Rectory (Dramatised)

The haunting of Borley Rectory

This style of audio performance was going to be (I thought) a sound delight. But, no it was boring. There was no story told, just second-hand--they told the visiting guest, this happened then that happened. Followed by a woman choking? AAH, AAH, AAAAHHHH. And down on through the centuries. The best thing about this performance was that it was over in less than an hour.

This recording is very atmospheric in the way that horror films used to be in the 1970s. Its narrated by the inimical Edward de Souza aka the man in black.The storyline cleverly interweaves a chronological documentary style with frantic dialogue and blood curdling sound effects. This creates a heightened tension. Using pulsating synthesiser music to increase the sense of dread and forbidding, the story unfolds in a highly expressionistic performance of dramatic brilliance. Its impressive in a way that will reward listeners and enrich their imagination time and time again.

Genuinely creepy tale, but I found the electronic special effects to be irritating, and the female vocalisation to be distractingly over the top.
The narrator, however, was excellent.
Worth a little flutter, I think

Lovely narration by Edward Desuza, but far too much wailing and wa wa noise. Amateur production.

Very enjoyable if you are interested In the past if this known most haunted place in Britain. good dramatization.

The Haunting of Borley Rectory

I found the above drama very atmospheric-it had the hair standing up on the back of my neck in some parts!
It was well acted with good narration.
I have some friends who live near Diss in Norfolk and the next time
I visit the area I must take a trip 'over the border' into Suffolk and Essex just to see where the Rectory stood.
I run an internet charity radio service here in Leeds and it would be great to broadcast this if given copyright permission.

Loved it. A good old fashioned ghost story, which I still find scary even now.

pure classic, I listen when I kid
can recommend (recommend reading in the dark 😱

Dreadful - in a bad way

Terribly bad performances (including awful screaming, dreadful French accents & even a poor cat impersonation). The music & sound effects range from bad to inexplicable. Not very much information is given about the house/hoax/story of the rectory. It’s all a bit Monty Python without it being at all funny or entertaining.

Quite good on the whole.
Overacting by those playing the ghosts gets a bit much after a while but all in all quite good.