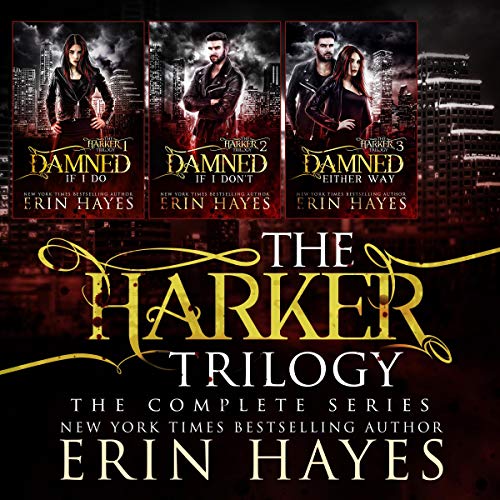 "Vampires killed my sister and infected me. Now I have to pick up the pieces before I die."

If you love Anita Blake, Buffy the Vampire Slayer, and a wholly original take on vampires, you'll love The Harker Trilogy by The New York Times best-selling author Erin Hayes. From bloodthirsty creatures of the night to forbidden romance and a conspiracy that could destroy us all, join Edie Harker as she tries to save herself from a fate worse than death.

Book one: Damned if I Do

They killed my sister and infected me. Now, I have to pick up the pieces before I die.

I’ve spent the last five months trying to find the bastard who took my sister’s life and ruined mine.

Being brought up in a family that hunted the supernatural should have helped, but even with a slim chance that I can save us all, there’s still the bigger chance I'll die trying.

Unfortunately, there’s one important thing my family didn’t tell me: When you fight against immortal vampires, you’re the one who’s running out of time.

Book two: Damned if I Don't

I may be a vampire hunter. But I’ve single-handedly screwed up big time.

After botching our chance to cure vampirism and the infection that’s killing me, I’m at a loss. My cousin Carl won’t speak to me. The bastard who killed my sister is still alive. And Jude, the amnesiac vampire, says he’s in love with me.

What’s even more shocking is that I love him back.

But the more Jude learns about his past, the more it will tear our relationship and our lives apart. I’m running out of time to find a new successor to become the new Progenitor. Because, when I die, it’s game over for all of us.

I’m finally free of my family’s curse. Except now, the world is ending. FML.

Anthony, the vampire that killed my sister and my brother-in-law, has won. I've lost everything. I no longer have my powers. I have no idea where Amelia is. And the vampire I love has surrendered to the hunger that is throwing the world into chaos.

The worst part? I can't do anything about it because I'm no longer the Harker. Sure, I'm not dying anymore, but I'm barely living at this point.

But there may be one last chance to save us all. If only I can find it in me to make one final sacrifice.

Scroll up and buy the audiobook today!

What listeners say about The Harker Trilogy

A little hard to finish

Annoying voice at times. Narration was not my cup if tea. Story was a little boring with some parts that just seem irrelevant and unnecessary, making it drag. Easy to follow the Story line.