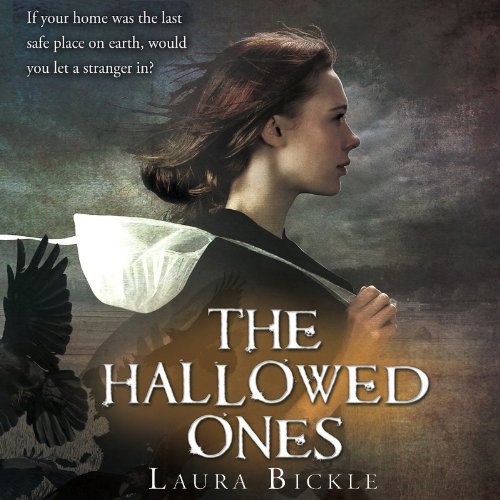 Katie is on the verge of her Rumspringa, the time in Amish life when teenagers can get a taste of the real world. But the real world comes to her in this dystopian tale with a philosophical bent. Rumors of massive unrest on the “Outside” abound. Something murderous is out there. Amish elders make a rule: No one goes outside, and no outsiders come in. But when Katie finds a gravely injured young man, she can’t leave him to die. She smuggles him into her family’s barn - at what cost to her community? The suspense of this vividly told, truly horrific thriller will keep the pages turning.

What listeners say about The Hallowed Ones

Not well written and under performed.

What would have made The Hallowed Ones better?

Take out all the words and start all over again.

What was most disappointing about Laura Bickle’s story?

The fact that it was sold as an Amish story and had very little to do with the Amish way of life.

The reader couldn't read well. She read a sentence and then, as if she had forgotten the next few words were in the same sentence, she sort of added them on in a lower voice.

If you could play editor, what scene or scenes would you have cut from The Hallowed Ones?

I did not finish the book. I would have taken out the first scene of the helicopter crash and the "beast" or whatever in the helicopter.

Couldn't stand it. I very seldom not finish a book but this one was too much for me. I paid for it for nothing.

If you could sum up The Hallowed Ones in three words, what would they be?

I thought I was ahead of the story, and could guess what happened next. I loved that I was wrong at each turn. The story wasn't what I expected and kept me guessing until the very end.

Which character – as performed by Nora Hunter – was your favorite?

I loved the main character Katie. She was always questioning. She wanted answers and wouldn’t just sit by and take the opinions of others as truths.

I really enjoyed this book. It makes a person question their own beliefs and thoughts on religion and life. Even though this book is a work of fiction, it creates questions about religion and truth.

Great twist on an old tale

The end of the world as we know it from an Amish point of view. Well told.

The Hallowed Ones is an old fashioned YA horror story with a twist: adding in the perspective of a slightly rebellious teen Amish heroine. The author does a great job of ratcheting up the terror and unease but at the same time, lack of an original type of vampire/zombie made this somewhat of a let down (e.g., garlic, invite them in, etc.). A lot just didn't make sense and honestly even seemed kind of silly. But it is an easy read and I did complete it through to the end.

Story: Katie prepares for Rumspringa with her best friend Elijah; it is a time she will get to experience the outside world and decide where she wants to be. But then the apocalypse happens and the Elders close the community down to prevent outside contamination. Katie learns that the world has devolved into vampirism but the Elders won't listen to her, claim the problem is random wolves, and even Elijah, who lost two brothers in an outside City, is trying to shut her down. With only an elderly 'hexenmeister' and a boy she saved/is hiding, Katie will have to find a way to get the Elders to accept the truth - especially now that the darkness has found a way into the community.

I am not a horror fan and tend to avoid the genre; however, this was highly recommended for being different and I can see the appeal. The writing flows well and Katie is a likeable, even relatable, character. She's given a love interest in the form of the boy outside and together they will philosophize a lot - he loves Egyptology and she has her Amish beliefs.

Katie is a bit rebellious and this will be both her boon and her downfall. Of course, it makes for great reading as we follow her and discover more about the vampires and what has happened in the outside world. I was admittedly disappointed that the vampires followed the cliche rules: use garlic to ward them off, stake the heart/cut off the head to kill, glowing red eyes, damaged by holy water or holy things (regardless of the holy - from Stonehenge to a witches coven in NJ), able to hypnotize from a distance, etc. It worked for the story, especially given that the old 'magician' hexenmeister knew from past histories of vampire infestations, but at one point I had to stop and roll my eyes at the clear lack of coherency or believability of the vampire plague.

As well, the language and dialogue used by Katie didn't sound believable as an Amish - calling a phone a 'device' and 9/11 by that name - supposedly she only had been out of the compound a few times. She even randomly memorized her friend's phone make/model upon one viewing - which came in handy afterwards when she was at an abandoned drug store and decided to get a charger. Again, not very likely.

The second book veers quite a bit and unfortunately spends too much time bible thumping and sermonizing. So I don't recommend continuing the series beyond this point.

I listened to the audible version and the narrator did a decent job. She sounded young and though Alex's Canadian accent slipped a lot, at least it was there.

A interesting and enjoyable story.

Would you consider the audio edition of The Hallowed Ones to be better than the print version?

Yes. The lady who voices Katie did an excellent job.

What other book might you compare The Hallowed Ones to and why?

Which character – as performed by Nora Hunter – was your favorite?

I enjoyed it immensely

Katie as a character was believable and not a self centered spoiled brat which so many authors have made their characters lately.

I had no Idea this was a Vampire story, if you are like me, & don't like Vamp books, delete it from your wish list, if you do, it is worth a listen I guess?

This book was amazing! I absolutely loved this, I am amazed how the author managed to mix Amish and zombies together in a pot and come up with this masterpiece.i literally was addicted while reading this from beginning to end, I loved the characters, the setting and the action it was great. I have had to withhold myself from diving straight into book 2, but seriously I recommend this book to all as it is really a great read, hands down one of my favourites of this year😀