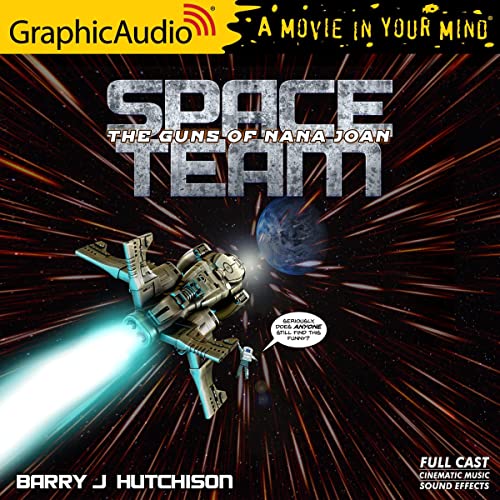 The galaxy is at war, and Space Team just can't seem to stay out of trouble. Following one close call too many, the team hides out on a tiny backwater moon, hoping the hostilities between Zertex and the Symmorium will all just blow over.

But when first officer Loren's brother is taken prisoner and sentenced to death by the Symmorium, Cal and the others must make a choice - a choice that could spell the end of Space Team forever....

Packed with space battles, giant robots, and a dangerously obese man being sponged down with soup, The Guns of Nana Joan is the hilarious fifth audiobook in the Space Team saga.

What listeners say about The Guns of Nana Joan (Dramatized Adaptation)

Usually by book 5 of a series, I'm tired of the characters and the ongoing plot lines. But Space Team has been absolutely hilarious and entertaining from the start. Granted, this is a dramatization, not the actual book, but it's superbly written, acted, and produced. I highly recommend it to other fans of sci-fi comedy. It's fonking awesome!

I Loved the whole series. Great characters,wonderful actors. Can't wait for the next one.

Funk'n fantastic!! So funny and easily the best space opera. The graphic audio really brings it all home. I started the series with regular audio. After, I can't possibly go without it!!