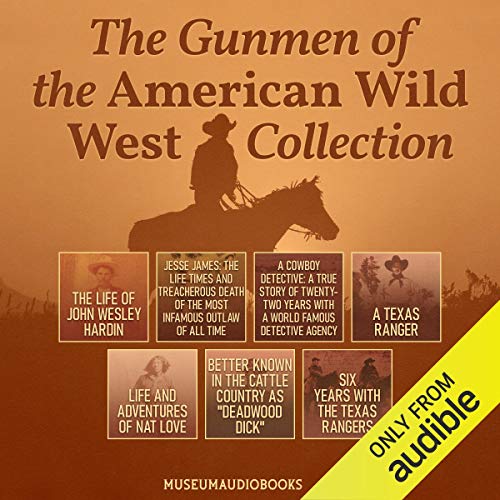 The Gunmen of the American Wild West Collection

The Life of John Wesley Hardin, Jesse James: The Life Times and Treacherous Death of the Most Infamous Outlaw of All Time, A Cowboy Detective: A True Story of Twenty-Two Years with a World Famous Detective Agency, A Texas Ranger, Life and Adventures of Nat Love, Better Known in the Cattle Country as "Deadwood Dick", and Six Years with the Texas Rangers

The Gunmen of the American Wild West Collection brings to life the history of the frontier west of the Mississippi in the latter parts of the 19th century. The gunmen ranged from lawmen to cowboys, ranchers, and outlaws. Most of the outlaws in the Old West preyed on banks, trains, and stagecoaches. Although spread thin, the law was present, usually on the level of deputy US marshal, county sheriff, and the town marshal or constable.

Book one: The Life of John Wesley Hardin. Hardin was an average man - except for his above-average gunfighting. A Texan sympathizer to slavery writes about his deeds, some of which were commendable while others were downright deplorable. These memoirs of the outlaw and controversial folk icon was published the year after his death in 1896.

Book two: Jesse James: The Life Times and Treacherous Death of the Most Infamous Outlaw of All Time. Jesse James was a guerrilla during the Civil War and afterward pursued a criminal career that lasted more than a decade. Frank Triplett’s biography discusses every one of the robberies and acts of violence that the legendary outlaw and his gang perpetrated. The book is riveting and provides comprehensive coverage of the James Gang’s infamous crime spree.

Book three: A Texas Ranger. Napoleon Augustus Jennings was a prominent member of the Texas Rangers responsible for border patrol under the command of L.H. McNelly, when Southern Texas was being overrun by outlaws. Jennings' account includes many incidents of clashes with Mexican guerrillas and confrontations with John Wesley Hardin and others.

Book four: A Cowboy Detective: A True Story of Twenty-Two Years with a World Famous Detective Agency by Charlie Siringo. Siringo was a Texas detective who posed as a cowboy, miner, man-on-the-run, hobo, or whatever identity was needed to get to the bottom of criminal enterprises. He infiltrated unions, criminal gangs, and businesses to expose criminal activity.

Book five: Six Years with the Texas Rangers. James Gillett joined the rangers in 1875 and for the next six years he would be challenging criminals, fighting in the Mason County War, capturing vigilantes, and maintaining law and order in the towns. Gillett describes the kinds of action that established the Rangers' enduring reputation.