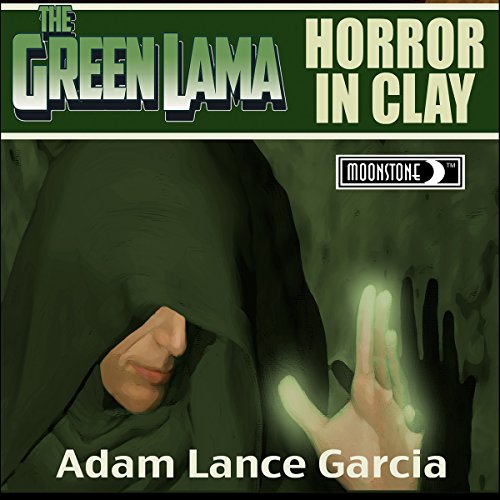 The Green Lama: Horror in Clay

New York, 1938. The German consulate has been attacked, leaving all but one of the Nazi diplomatic corps brutally murdered. Only Jethro Dumont, the Green Lama, and his associates, Jean Farrell, Ken Clayton, and Lieutenant Caraway, can find out who's behind this horrible crime. But as the Green Lama's investigations deepen, he discovers a crime far greater than any ever committed by man and learns a secret that will define the course of his destiny.

What listeners say about The Green Lama: Horror in Clay

I'm Green with envy it was so good!!!

I'm not going to lie, I loved the first book, Scions, and being that I am a Green Lama fan I knew this was going to be good. Did I say good? It is even better than Scions (if that is possible) with a great antagonist. Is it wrong of him to do what did, given what he knows?

Some big time props to Jiraiya Addams once again. I continue to be amazed at his vocal prowess. There are a ton of characters, and he voices them all so distinctly that you never wonder who is speaking, and you can empathise with them, as he easily conveys emotional states of mind. I believe, that in my last review, I stated that listening to him was like an Old Time Radio show, but in modern day. That is an understatement, because all I need is an old radio from the 40's to sit in front of me while I listen to him and I would be transported back toanother era.

This book, I do believe, sets up the next novel so that the Lama can transition into WWII. It has several occult themes going on in it, such as the kabbalah, and even things that might come from a fellow whose initials start with an H and a P. This novel really crams in action, mysticism, and unertones of horror beautifully.

I really want to know just where Mr. Garcia came from, as he really knows the ins and outs of this characte and, the era he is from. You would almost believe that he grew up in the 40's, but he is far too young for that. I almost wish that he would have Mr. Addams do a brief commercial for something like Blue Coal, likie they did on those radio shows to cement the whole experience. Either way the writing is brilliant, and the narration is spot on perfection.

The book is full of action, secrets are revealed, truth about the Lama himself is disclosed, and we are left with the sword of Damacles hanging over the Lamas head as he looks to what the future brings. A fantastic story.

This is a 'prequel' to SCIONS by the same author,and is a better story I think. There was a lot more plot to chew on, and some twists and turns that kept me guessing. My favorite part was actually the 'B-plot': the 'not exactly a buddy-cop movie' between Caraway (the tough-guy police detective) and Colonel Gan (the tough-guy soldier). This one has even more of Lovecraft's Cthulhu Mythos stuff in.

The narrator did a fine job. The cast is big, but he made the voices distinct enough that I never had trouble knowing who was speaking, and the voice-acting was good during the more intense and emotional scenes.