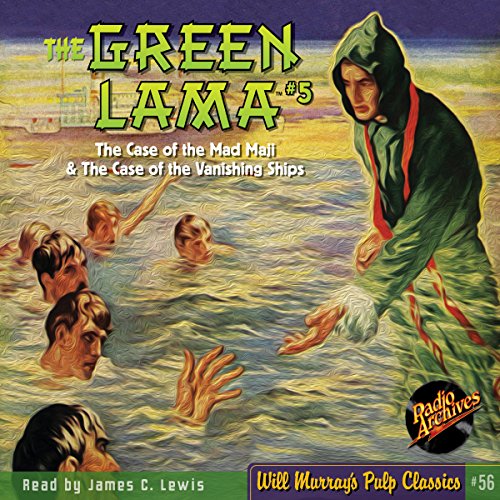 For our fifth Green Lama audiobook, we continue with our chronological readings from his classified casebook. As it happens, two of his most mystifying adventures have come around to make this a strangely satisfying listening experience.

“The Case of the Mad Magi” was first printed in the February, 1941 issue of Munsey's Double Detective pulp magazine. Here, author Kendell Foster Crossen exploits one of his personal areas of expertise, the exciting world of the progressional magician. These were the halcyon days of Blackstone and Dunninger. Crossen was himself an amateur magician and close friends with several like-minded others, including Walter B. Gibson and Clayton Rawson, creators of The Shadow and The Scarlet Wizard, respectively, both of whom are mentioned in this superb story.

Here, The Green Lama pits his wits against an unknown magician of crime, backed up by his ever-shifting team of ordinary citizens plucked from all walks of life to assist in his investigations. What results is a riveting expose of the magical life, filled with behind-the-scenes secrets, but also packed with high drama.

In past cases, Jethro Dumont, the daring American who journeyed to Tibet only to return to the U. S. as a Buddhist priest dedicated to eradicating evil and suffering - not necessarily in that order - found himself in Hollywood, delving into crimes among the stars of the Silver Screen. Here, in The Case of the Vanishing Ships Lieutenant Caraway summons him to a different Hollywood to investigate a rash of passenger liners which are going missing off the Florida coast. Vanished without any trace of passengers, crew or even floating wreckage. Is this the work of Axis U-boats, Caribbean pirates, savage criminals - or something even more malevolent? Ken Crossen brings to bear his deep knowledge of magical misdirection to pull off a plot as audacious as a stage illusionist making a full-grown elephant vanish!