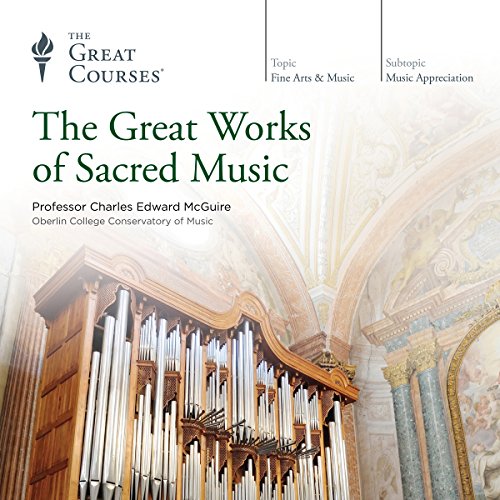 The Great Works of Sacred Music

Western classical music is one of humanity's most sublime artistic traditions. This musical language - encompassing genres from symphonic and instrumental music to choral works and opera - was created through the meeting of art and faith.

The lineage of sacred works produced some of the greatest masterpieces in Western art and created the foundation of the Western musical canon. This phenomenal tradition includes works of genius such as:

As a fascinating counterpoint to the music itself, you'll explore the sociological background of its writing and performance. Sacred works were often commissioned by important clerical and aristocratic patrons, and composers were challenged to write music that was not only religiously edifying but also entertaining and publically successful. Over time, sacred music moved beyond church walls to become appreciated in secular venues as autonomous works of art.

You'll hear stunning musical excerpts covering over 1,200 years of music, from medieval chant to the massive sacred works of the late 19th and early 20th centuries.

What listeners say about The Great Works of Sacred Music

This is the fifth music appreciation course I have taken from the Great Courses. I had no experience with music appreciation before beginning my education through these series of lectures. If you are like me and have little or no musical background, then I do not recommend starting with this particular course because the professor assumes some basic knowledge of terminology and music history. I strongly recommend beginning with Professor Greenburg's How to Listen to and Understand Great Music course before moving on to this one. If I have a complaint about this particular course, it would be that it is too short. The main topic omitted, which the professor openly admits, is music designed for congregational singing. In other words, this course focuses on music designed to be sung to the audience rather than music to be sung by the audience. So, this course omits most familiar religious songs commonly heard in church services. I wish the course was expanded to include enough lectures to incorporate this topic. That being said, this is still a wonderful course, and I learned a great deal such as the history of Handel's Messiah and Haydn's Creation. I purposely timed when I listened to this course so I could listen to the last lecture close to Christmas. The last lecture is by far the best and is dedicated to the history of Christmas music. The professor does a great job explaining the development of the Christmas music tradition.

Although some of the musical analysis was beyond my complete understanding, I enjoyed it and learned. Beyond that, the history, background and excerpts were most enjoyable. The professor was knowledgeable, enthusiastic and I found his occasional singing to illustrate a point just fine. Well worth my time and one I will probably listen to again.

Would you try another book from The Great Courses and/or Professor Charles Edward McGuire?

What could The Great Courses have done to make this a more enjoyable book for you?

There were significant volume challenges, the music was consistently too low requiring the volume to be increased to even hear it well, much less appreciate the beauty and concepts that were being discussed. I have listened to a few other great courses and enjoyed them thoroughly.

Concept is excellent, but honestly I gave up somewhere in the 2nd or 3rd hour due to the volume challenges

A worthwhile series, even if it sound like it was recorded on a potato...

The audio quality is atrocious, but the subject and the speaker are engaging and interesting to listen to, and make the experience worthwhile.

This course would be more accurately titled "An overview of Christian Sacred Choral Music from the Middle Ages to the 19th Century". Professor McGuire clearly has an encyclopedic grasp of his subject, but the material is presented from the perspective of a chorister/theologian, and seems more appropriate for a Theological Seminary than a School of Music.

I enjoyed this course. There were some things my own research has led me to disagree with, but for the most part this is an excellent primer on the development of sacred music. McGuire’s unit on Elgar is particularly enjoyable.

I so wish this was better

The subject matter is interesting, but the Professor is not. His voice is on the dull side, and note that there are several times that he sings some of the material. Unfortunately, the timbre of his voice is just a bit grating, and for a professional vocalist, he certainly misses many of the notes. Some great music here, but he just doesn't make it that interesting.

This is an excellent series of lectures which covers the evolution of western sacred music. Those with a musical background likely will have an easy time grasping the content of the lectures. However, those with less musical knowledge can use these lectures as a foundation for further exploration.

For me this book was most educational and insightful. I learned much! Very well done.

Overall, I thought this was a lovely overview of the sacred music topic. I thought the first section was the hardest for me to be engaged with, but once he started examining in depth works I have seen performed (and some I haven't) I loved it. And the beautiful ending section on Christmas music I saved for December!

My only complaint is that I thought he would be covering more hymns and every day sacred music. After he got past the medieval music, he really focused on pieces by Mozart, Handel and the like, which I am familiar with from the concert hall -- as opposed to pieces I would have known as a churchgoer.

Good book, but terrible singing from the lecturer

It's a very interesting and informative book, but the lecturer insists on singing the music parts as demonstrations, which unfortunately sounds terrible, since he's not a trained singer. You need to grimace your way through these.