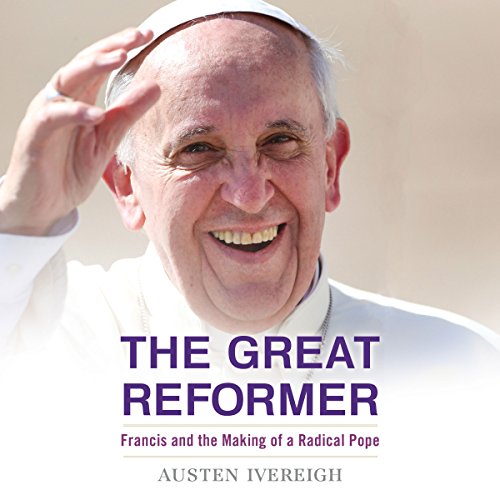 A biography of Pope Francis that will describe how this revolutionary thinker will use the power of his position to challenge and redirect one of the world's most formidable religions.

An expansive and deeply contextual work, at its heart The Great Reformer is about the intersection of faith and politics - the tension between the pope’s innovative vision for the Church and the obstacles he faces in an institution still strongly defined by its conservative past. Based on extensive interviews in Argentina and years of study of the Catholic Church, Ivereigh tells the story not only of Jorge Mario Bergoglio, the remarkable man whose background and total commitment to the discernment of God’s will transformed him into Pope Francis - but the story of why the Catholic Church chose him as their leader.

With the Francis Revolution just beginning, this biography will provide never-before-explained context on how one man’s ambitious program began - and how it will likely end - through an investigation of Francis’s youth growing up in Buenos Aires and the dramatic events during the Perón era that shaped his beliefs; his ongoing conflicts and disillusionment with the ensuing doctrines of an authoritarian and militaristic government in the 1970s; how his Jesuit training in Argentina and Chile gave him a unique understanding and advocacy for a "Church of the Poor"; and his rise from Cardinal to the papacy.

I found this a bit tedious. Not sure why. Just didn't grab me enough to keep reading.

I highly recommend this:) and I'm not catholic!

I have been so interested in Pope Francis since day one! I enjoyed getting to know him better and love the man of God he is committed to being!!

The author takes a unique approach in this biography of Pope Francis. Significant events since he has become the Bishop of Rome are analyzed by looking back at his past and leading up the current event.

Because Francis' papacy is quite new the book has a bit of an unfinished feel; that the chapters could be essays themselves and they don't quite fit together in a logical order: sort of what would happen if James Burke's Connections would be if all the different histories didn't fit together to build a single invention. I look forward when to this author's revision to this after the end Francis' papacy.

However, this book is invaluable in understanding how this pontiff will change the Church in becoming more ecumenical, collegial, mission focused, and emphasizing individual spiritual discernment more than ever. Pope Francis is not some South American Pope Paul II or a secret marxist/secularist/liberal/neoliberal/conservative/fascist. He truly is our first Jesuit pope and will hopefully bring all Christians together with the Church a new age of renewal and evangelization.

This book will challenge everyone!

This helped me see Pope Francis and all the events of his life that formed him. It is about a man who rises early to pray for hours so as to be open to the Holy Spirit. His true love of the poor and The throwaways is challenging to anyone who listens to this book.His vision is to first be a friend then as friends share our differences.He is not a liberal ,he is not a conservative , he is not any political group. He just lives every moment making a great effort to be in God's will. He will stretch all to be open to the Surprise able . We can be sure he is going to challenge every one of us to expand our hearts and attempt to hear what is God saying in this moment. I highly recommend this book.

What did you love best about The Great Reformer?

Tells the story in the historical context of Pope Francis life. This helps the reader have a better understanding of how Jorge Mario now Pope Francis, come to be where he is in the present - A great reformer within the ill Catholic church

All the book has been an eye opening experience. I listened to it twice and now I'm reading it!

Love it! And it seems to me that after listening to this book (and now reading it) I understand better a great man, and I'm eager to follow more closely his work as Pope Francis and see where he takes the Church.

Very well narrated. Enterteining and thorough. It took away several preconceptions I had. I recommend it.

I enjoyed this tremendously. I have a much better appreciation of Pope Francis. It's all God's grace and he came along at exactly the right time. May God give him good health and energy to get the job of reforming the Church done.

Absolutely surprising yet at the same time he's just Peter I guess. Loved the author's Argentinian accent by the way.

Now I undestand the Pope

Great book, great perpective to undestand who is the Pope and where is he going

Listening to this only confirms the impressions made by a two hour meeting with this remarkable truly Christlike man! I will now read the book! A future classic!

I am a Catholic and this biography of Pope Francis has deepened my faith. It is brilliantly narrated by the author.
The book is exceptional because it is well researched, it gives wide background to the actions of Francis before he became Pontifex Maximus and is a great journey in which I felt I was accompanying Francis.
What a full life! How revealing! What a journey!

A book full of surprises

A book full of surprises about a man full of surprises. The book, like is erudite yet very readable and aceesible. The man has the potential and the moral and physical courage to be a King, a Kennedy or a Ghandi, but he wiil be a Francis.

If you could sum up The Great Reformer in three words, what would they be?

Absolutely loved this book. Totally fascinated and couldn't stop speaking about it. The story of the Pope's life so far and the history of Argentina and how they affected each other is great reading.

What does Austen Ivereigh bring to the story that you wouldn’t experience if you had only read the book?

The passion comes through in his reading.

History in the making.

Amazing book about a remarkable man

What a fantastic book. Inspiring, well written and read. A must read for anyone wanting to understand humility and character in the context of mission for the good of man, through faith. A really amazing story about an awe inspiring man. Essential reading.

Insightful look into what make Pope Francis the tour de force he is.