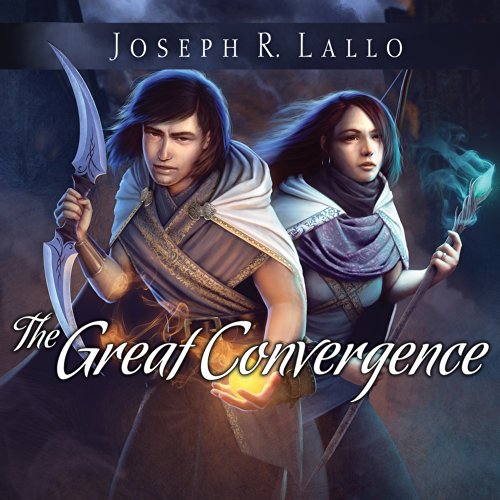 The Great Convergence continues the tale of young Myranda Celeste. With fresh knowledge of magic and steadfast resolve to see the end of the war that plagues her land, Myranda sets out to find and unite the five fated heroes, the Chosen. Each new warrior brings her world a step closer to peace, but does she have the strength to survive the trials ahead?

What listeners say about The Great Convergence

An exhibition in poor decision making.

If the main character had not dropped 30 or so IQ points from the first book. Always making terrible decisions, and seemingly never to learn from them. I could only feel that the irrational decisions where made to progress the story in a way so that certain places would be visited. Actually the dimming was not limited to the main character. This probably was the cause for interaction between characters to be continually off balance.

Has The Great Convergence turned you off from other books in this genre?

OSC's magic fantasy is where I started, and I did enjoy the first book. I don't think I'll get reading the conclusion as the second book seems to out cut out the parts a like and filled many pages with few things that were actually thoughtful. More from this genre Yes; more from Joseph R. Lallo, probably not.

What does Karyn O'Bryant bring to the story that you wouldn’t experience if you just read the book?

Good overall, and I assumed the 'Performance' rating is for the narrator. She was easy to listen to over all, kept the voice she used for each character broken up enough so that there was never confusion between who was talking. Used an odd whisperish voice for the main character, didn't really bother me, but was odd.

If you could play editor, what scene or scenes would you have cut from The Great Convergence?

The main character's time in captivity, it was reached through terribly illogical trains of thought reinforced by secondary characters that should have known better, which resulted in actions that should never have been taken. To compound things, anything that was an implication of the captivity was undone by the time it ended.

I often found my self anticipating clever twists, little did I realizing that the poor insight into situations given by characters, was actually the accurate insight given of a poorly constructed reality.

Full of adventure and magic. I enjoyed all the different characters. I hope the little dragon finds away back.

Book 2 is entertaining but somewhat wordy. If you don’t expect total reality-based plot line, you can enjoy the story. People and things just suddenly appear when convenient, which doesn’t bother me but will some. I found it enjoyable

Just as good the second time through. I'm going through the whole series again. Yay.

I loved this book, but the only problem was the jumping back and forth between character in different places got confusing at times. it did work it's self out though.

a little too long rooted

I was so looking forward to the next book and the first half was as good as the first book,. it started too lag with too many repeated scenarios. I will still get the next book, hoping it moves like the first boik

I really enjoyed the story, it continues with just as much enthusiasm as the first book, and leaves you ready for the next one. The reader is a bit slow though. I have to set it to 1.5x to avoid being frustrated by her reading pace.

This whole series is great. The narrator is amazing. The imagination behind these stories is admirable. The best part was when Miranda saved the day..

Again I have to say I love this series! You can't help but to get caught up into the emotions and the adventure our heroes go through. I would recommend this series to anyone.

Not as good as book 1- but a stellar ending

I fell in love with book 1 of the series, and being captivated by the story- I eagerly jumped into The Great Convergence.

The narrative is good, the narrator even better.

However the book tends to draw out about half way through until the last couple of chapters. I feel the story could have been achieved the exact same way minus a few less hours. It gets very descriptive about things that are unimportant and it starts to get boring.

I like where the story is heading though, so I weathered it and finished.
The ending is fantastic- worth weathering through the boring bits in the middle.