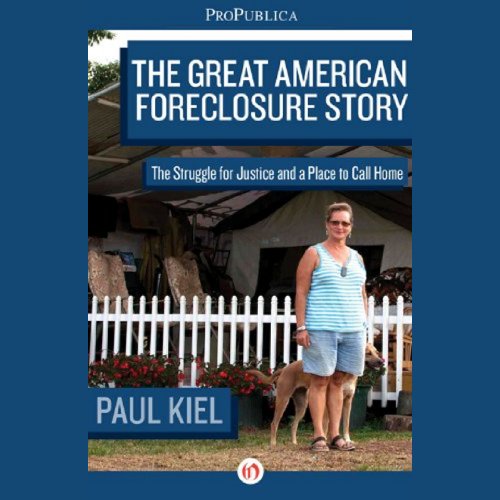 Since the foreclosure crisis began in 2008, nearly 4 million Americans have lost their homes. Foreclosures, as author Paul Kiel points out in his riveting The Great American Foreclosure Story, "is failure". How did America allow failure on such a grand scale?

Performed as an impassioned but reasonable plea by Gregory St. John, Kiel’s piece of long-form reportage uses one homeowner, Sheila Ramos, as a vehicle through which listeners may have a firsthand experience of foreclosure’s horrors. In one year, Ramos went from a three bedroom house with her three grandchildren to squatting in a tent outside city limits. The Great American Foreclosure Story is a nightmare of predatory lending, denied loans, and government failure, and is a significant contribution to understanding American experience today.

ProPublica’s mesmerizing and groundbreaking look at the national housing crisis, told through the lens of one woman whose story came to exemplify it.

Sheila Ramos’s story mirrors the lives of millions of Americans who have lost their homes since the beginning of the housing crisis in 2007. The Great American Foreclosure Story details with clarity and empathy the road that led Ramos and so many like her toward financial ruin. Once the owner of a small business and a home, Ramos fell on hard times. Predatory lending and denied loan-modification applications eventually sent her and her three grandchildren packing, leaving behind their house in Florida and winding up in a tent outside of Ramos’s faraway hometown.

Alongside Ramos’s story are additional investigations by ProPublica reporter Paul Kiel and his colleagues Olga Pierce and Cora Currier documenting the systematic failures at banks, mortgage servicers, and government watchdogs that have exacerbated the country’s most severe foreclosure crisis since the Great Depression. Drawing from whistleblower testimonies, extensive homeowner databases, and a trove of underlying data, The Great American Foreclosure Story is a comprehensive and unrivaled look at the housing crisis, and its continuing human toll.

What listeners say about The Great American Foreclosure Story