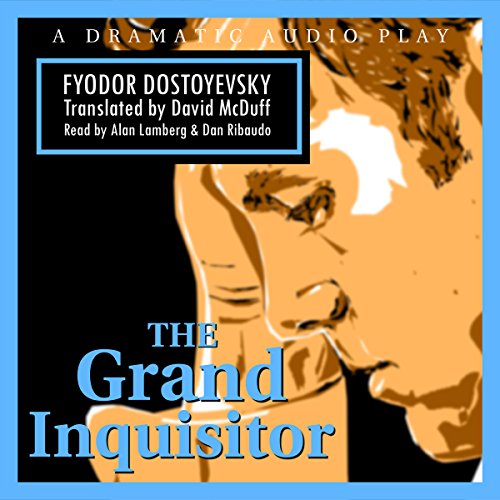 "The Grand Inquisitor" is a central chapter of Dostoyevsky's novel The Brothers Karamazov. The middle brother, Ivan, is having a conversation with his younger brother, Alyosha. Ivan represents the rationalist and nihilistic ideology that permeated Russia in the 19th Century. Alyosha's beliefs counterbalance his brother's. He embodies hope. Ivan tells Alyosha a vision where the grand inquisitor, during the Spanish inquisition, encounters Jesus Christ, who has made a return to Earth. Here, Jesus is rejected by a world leader who says, "Why have you come now to hinder us? We are working not with you, but with him." Ivan's vision reveals the suffering in his heart, the doubt he feels in the world. He struggles with feeling separate from all whom he loves. Do you see yourself in Ivan?

The Brothers Karamazov was written by Fyodor Dostoyevsky (1821-1881). It was written on two levels. On the surface, it is the story of a death of a father, where all three sons share varying degrees of complicity. But on a deeper level, it is a spiritual drama of moral struggles between faith, doubt, reason, and free will. Dostoyevsky interwove themes of a struggling family, the deceptive beauty of institutions, existential angst, and hope. Here, we look at the theme of hope, of spiritual devotion to the divine nature of our world where, in spite of the darkness that slowly clouds our hearts from bitter experiences, there exists proof in the divinity of our universe in our ability to love.

Translator David McDuff was educated at the University of Edinburgh.

What listeners say about The Grand Inquisitor

I think that anyone who is interested to read this book should keep in mind that this is framed as a series of questions about faith in god, in man, and in human nature. Take a step back and see the book as a whole.

This breathy, stuttering, unprofessional narration is the worst I’ve ever heard from Audible. do not buy.

certainly worth a read and a close study

I am moved by the lost nature of the story. However, I must admit I was expecting a more insightful commentary. This is a good book and certainly worth a read and a close study. But I did not find it as interesting and insightful as I find many others. Still worth reading though.