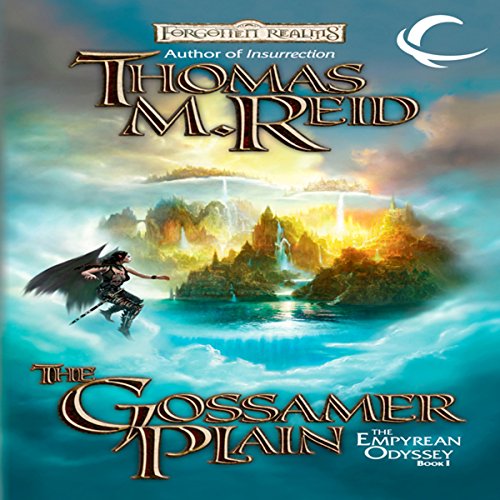 Ever wonder what could bring a demon to the gates of heaven?

Aliisza and Kaanyr Vhok have returned from their attempted invasion of Menzoberranzan and turned their sights on Sundabar. But before she can complete a mission in that beseiged city, Aliisza finds herself in the one place a demon would never want to go, no matter how sure she is of her wits and cunning: the very heart of Celestia!

Join everyone's favorite succubus and her half-fiend boyfriend, introduced in the War of the Spider Queen series, in the first installment of their own exciting new trilogy!

What listeners say about The Gossamer Plain

Good story, but French accents? Couldn’t get passed it. Hopefully they, or she redoes it without them.

it felt like a DnD quest all the way through. Glad the ending kind of gave some finality and new light on the story from the last book these two were in. Ended on a cliffhanger but i guess thats what multipart stories do.

voice acting was ok, no erik singer but my ears adjusted as it went on. the pacing was off, gotta give the listener a moment to realize that the scene changed. early on it took me awhile to realize as such when i was still trying to gather a visual.

to be honest, a lot was left unexplained. i wont go any further than that to avoid spoilers, but it felt more like it ended mid novel.

Where in the novel does it suggest these awful accents for the characters? Further the accents sounded strained and fake. Please just read the novel

not what I was expecting.

The story isn't bad. Their are a number of glaring issues that I constantly criticized throughout the story, knowing forgotten realms as I do. But the story itself isn't bad at all. The narrator on the other hand.... French accent, really... she would be more suited to mystery books I think.

do they have a summary?

I like a lot of the characters. they do some cool things. the narration is awful. the book gets muddled up in senseless what if thinking by the characters. also the whole thing is not really plausible by what I know of angels in d and d. they would smoke that demon and there wouldn't be a story. I had a bad experience with this one.

The accents get a bit confusing at times, but the narrator does a Fabulous job! I love it!

didn't care for the performance the accents she placed on the characters seemed out of place. liked the story very much.

ended up stopping in chapter 2, the audio track kept jumping a few seconds.. unfortunately I can't refund this title..