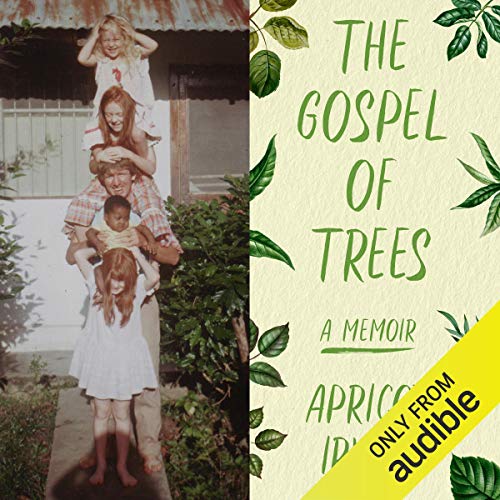 The Gospel of Trees

Apricot Irving grew up as a missionary's daughter in Haiti. Her father was an agronomist, a man who hiked alone into the deforested hills to preach the gospel of trees. Her mother and sisters spent their days in the confines of the hospital compound they called home. As a child, this felt like paradise to Irving; as a teenager, it became a prison. Outside of the walls of the missionary enclave, Haiti was a tumult of bugle-call bus horns and bicycles that jangled over hard-packed dirt, road blocks and burning tires triggered by political upheaval, the clatter of rain across tin roofs, and the swell of voices running ahead of the storm.

Poignant and explosive, Irving weaves a portrait of a missionary family that is unflinchingly honest: her father's unswerving commitment to his mission, her mother's misgivings about his loyalty, the brutal history of colonization. Drawing from research, interviews, and journals - her parents' as well as her own - this memoir in many voices evokes a fractured family finding their way to kindness through honesty.

Told against the backdrop of Haiti's long history of intervention, it grapples with the complicated legacy of those who wish to improve the world, while bearing witness to the defiant beauty of an undefeated country. A lyrical meditation on trees and why they matter, loss and privilege, love and failure.

What listeners say about The Gospel of Trees

I learned more about Haiti from Apricot than any other source. She did well to capture the dignity of the people and the beauty of the land. I loved how she intertwined the trials and tribulations of Haiti with that of her family life. She shared a passionate disposition with her father, the conflict and love between them clear throughout the story. I especially loved her father's dedication to doing the right thing. Despite his mistakes, he cared so much for the people and the trees -- I hope he's still reforesting. I also loved how she weaved the history of colonialism, showing how the impact is still alive today. All churches should recommend this memoir as mandatory reading so that rather than continuing to play the savior role, more foreign aid workers can approach other countries with respect for the locals way of solving their own problems. This is a worthy read, full of honesty, insight and beautiful narration.

Irving tells this story of missions in Haiti with skill, vulnerability, honesty, and grace. The story engages with searing honesty and continues without pretense and with great grace to its conclusion. Irving’s story is unique and immersive. As a missionary kid, this is the most freeing and true telling of a childhood such as ours.

Like the book When Helping Hurts, anyone thinking of doing or participating in a mission trip or extended work should read this. Excellent!

Fascinating Story of a Haiti and a family

The author tells a candid tail of her families experiances. The real life stuggles that families go through, the life long dedication to helping the less fortunate of Haiti. Great story