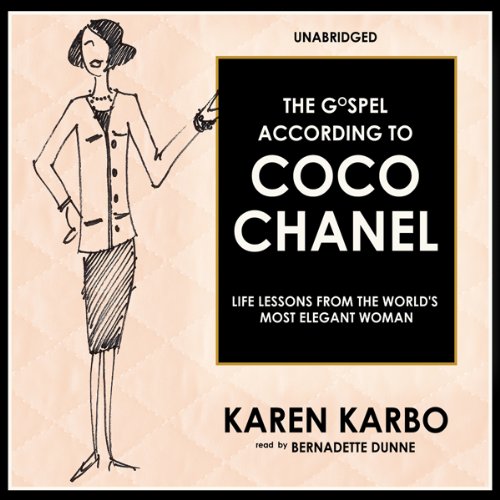 The Gospel According to Coco Chanel

The Gospel According to Coco Chanel

Delving into the long, extraordinary life of renowned French fashion designer Coco Chanel, Karen Karbo has written a new kind of book, exploring Chanel’s philosophy on a range of universal themes—from style to passion, from money and success to femininity and living life on your own terms.

Chanel is credited not simply with giving us the little black dress and boxy jackets, but with popularizing pants for women and easy, practical clothes that allowed women a chic freedom they’d never known before. In her strong-headed, elegant, opinionated, passionate, entirely French way, Coco Chanel helped bring women into the modern era, and because of this she was the only person in fashion to be named one of Time magazine’s 100 Most Influential People of the 20th Century.

Karen Karbo weaves Chanel’s life story into chapter themes that subtly convey life lessons and leave the reader utterly entranced with Chanel’s amazing individuality, confidence, and determination. The story of the designer’s extraordinary life and rise to unprecedented success is both compelling and admirable. And while the great Coco may have launched her singular empire a hundred years ago, her methods, attitude, and élan are as relevant and modern as ever, and perhaps more appealing. Chanel was a self-made girl who knew how to make do with less until she had more, discover and stay true to her own style, problem solve using the tools at hand, and do it all with seemingly effortless flair. The Gospel According to Coco Chanel is a captivating, offbeat look at style, celebrity, and self-invention—all held together with Karbo’s droll Chanel-style commentary and culled from an examination of Chanel’s difficult childhood and triumphant adulthood, passionate love affairs, career choices, habits, eccentricities, and personal philosophies.

“Anyone with a good sense of humor should hugely enjoy, or should I say enjoie, Karen Karbo’s funny and stylish take on Coco Chanel. Like a little black dress, this handy life guide will take you from day into evening. K. K. on C. C.: oui, oui!” (Henry Alford, author of How to Live: A Search for Wisdom from Old People (While They Are Still on This Earth))
“Wise, witty, and refreshingly colloquial, The Gospel According to Coco Chanel is an enchanting tour through the complex, often controversial life of fashion icon Chanel. Filled with relevant life lessons for the modern woman, this book is Karbo at her irrepressible best.” (Hilary Black, editor of The Secret Currency of Love: The Unabashed Truth about Women, Money, and Relationships)

What listeners say about The Gospel According to Coco Chanel

She's one of my faves

What made the experience of listening to The Gospel According to Coco Chanel the most enjoyable?

This is a funny and accurate account of Coco Chanel. You can relate to Karen Karbo as if she were your friend. If you like Chanel this is a must for you. You will learn more about her and get a kick out of the perspective.

Karbo is Such a Mom

If you could sum up The Gospel According to Coco Chanel in three words, what would they be?

Coco of course, but Karbo is quite interesting herself.

Have you listened to any of Bernadette Dunne’s other performances before? How does this one compare?

No, but I loved her performance. She really creates an atmosphere and brings a lot of energy to the story. She makes it alive like I believe Karen Karbo intended.

The idea that some of the greatest people of our time have "created" themselves literally in their own minds and refused to let anyone correct them.

Great infusion of fashion history in a way that a none fashion buff can also relate to. In fact, I was able to give background info to my husband (who probably didn't care, but pretended very well) about a recent Chanel headline.

Could not stop listening

I loved this book. I listened to it for 2 days any chance I had!! I loved that it did take the glamour of Chanel into account as well as the rough. Thank you for writing this book and sharing the story of coco Chanel

A funny balanced look at a complex woman!

I loved this book. The author doesn't hesitate to keep her wonderful sense of humor from shining through, even when she is directing it at herself. She also doesn't shy away from criticizing Coco, particularly over her affair with a Nazi during the occupation. Coco Chanel lived by her own rules. Was she always right no. She is however a woman who lived life to its fullest. She taught generations of women that as she said being beautiful starts with being yourself!

This was a good listen, you learn lots of quirky things about Coco Chanel and what she was about. Plenty of things I would never have guessed!

I thoroughly enjoyed listening to this audio book. The narrator's voice is perfect for the work. Sometimes, the narrator can distract from the content. As though the words are forced thru them and not natural. Bernadette is flawless in her presentation.

I was disappointed in this book. It just wasn't what I expected. I would like to return it for a refund if possible but I can't find the place to ask for a return credit.

A huge fan of this audio book, clever and a fun listen, it was a great introduction to the history of Chanel. fun and funny in a clever sort of way I feel smarter because of it.

A detailed account of a legend icon enigma and such. A great insight of the lady that lead an industry