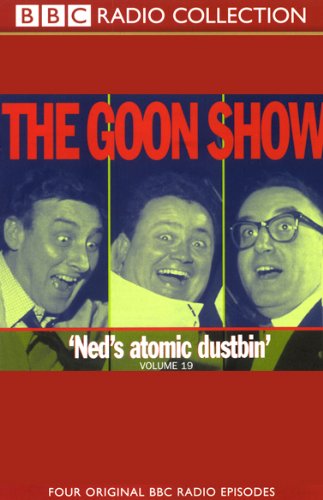 Goon but not forgotten. From 1952 to 1960 the Goons ruled the airwaves, the most celebrated and influential clowns in the history of radio.

GO ON, help engine driver Neddie foil the Great Train Robbers of snow-bound Pevensey Bay; explore the exotic delights of Shangri La (it sounds like Utopia but it's spelt differently); follow King Arthur Seagoon as he searches for the lost treasure of Tintagel (if you count the famous Eccles it's twice knightly); and ride Niagara Falls in Ned's foolproof (well, it proves them all fools) atomic dustbin.

They've been through hell to get here. There must have been a cooler route.

What listeners say about The Goon Show, Volume 19

Yes folks, it's true - the aunties at the BBC have authorised production of the revolutionary talking-type all-leather Goon Show (cleans ear canals better than all known detergents - use no other) in all-new digital electonic format on Audible.com. I've got most of this insane stuff on my old steam-driven audio cassettes (remember them), but will now re-purchase the lot in modern-type mp3 format, for the ultimate Ipod experience. For those of you who already know the Goons ... 'nuff said. For those who are unfamiliar with the works of the true masters of comedy, please download any one of the files to try out, settle back with your headphones, and experience the magic of the microphone. Your life will be changed forever. Your brain will be perceptibly softened. Your parents/spouse/partner/siblings will definitely look at you oddly from now on, and may well send you to a shrink, but that's a price you'll be glad to pay. You'll find the shrink listens to the Goons as well, and the two of you can cackle away together until the guys with the white coats arrive.