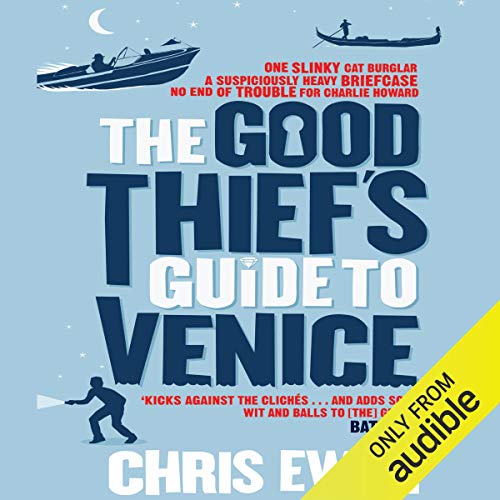 The Good Thief's Guide to Venice

The Good Thief's Guide to Venice

Charlie Howard - struggling crime-writer by day, talented thief by night - has gone straight. But holing himself up in a crumbling palazzo in Venice to concentrate on his next novel hasn't got rid of the itch in his fingers. And to make matters worse, a striking Italian beauty has just broken into his apartment and made off with his most prized possession, leaving a puzzling calling card in its place.

It looks as though kicking the habit of a lifetime will be much more of a challenge than Charlie thought. Sneaking out into Venice's maze of murky canals, Charlie's attempts to tame a cat burglar embroil him in a plot that is far bigger and more explosive than he could ever have imagined.

What listeners say about The Good Thief's Guide to Venice

this is a great series of books that have kept me entertained. this book has been my favourite so far due to it being based in my favourite city.

I think this will be my last one

I have enjoyed this series as a bit of fun, but they are getting weaker and weaker. I think a series can get better because you are more invested in the main character, but in this case I do not feel more invested than I did with the first book and the stories are bland so there is no real pace or excitement.

Hilarious! And Simon Vance is a true master.

Chris Ewans' sense of humor is great. I've listened to all in the series, and I can't decide for the best yet. I hope he keep 'em coming. Simon Vance is, well... Simon Vance. A true master.

As usual Simon Vance's narration was of an excellent standard. I enjoy listening to him and his accents and m/f voices are always spot on.
There is no need to read the books in order and there is always a bit of a recap in the book as to what has happened up to date but without the author spoiling previous books for you if you haven't read them. This book opens with Charlie and Victoria in Venice and Charlie has gone straight. Then a twist of fate and a change is on the cards ..... I have read all the books in the series and for me, I'm getting a bit fed up of Victoria. The story works better for me when Victoria is absent. Charlie's situations and internal thoughts are always funnier when he is interacting with others. However, I'm still in love with Charlie and will be sad when I'm completely up to date and waiting for Mr Ewan to write the next installment!

Another great book in the series

Simon Vance brings life the wonderfully colourful and witty characters written by Chris Ewan. Another excellent adventure with twists and turns, set this time in Venice. I have to say that I hope that there are more of these books as I have come to love the characters and their adventures.

the ending saved the book.

What made the experience of listening to The Good Thief's Guide to Venice the most enjoyable?

simon vance performance of the book.

it saved the book. the storyline wasn't as good as the first two books its on a par with the good thief's guide to vegas, a bit over the top.it was more like a story Charlie would put into his fictional character's novel.

this started out as being a really good series with realistic storylines now the author seems to have lost his way in trying to make it more gripping it has become in my opinion more far fetched. if the scenario had been Charlie writing about his fictional character in this situation it would have been a lot better.i have the next book in the series and hope it is better than the last two.