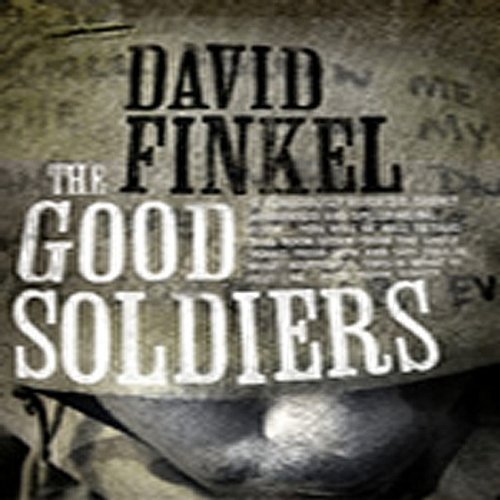 In January 2007 the young and optimistic soldiers of the 2-16, the American infantry battalion known as the Rangers, were sent to Iraq as part of the surge. Their job would be to patrol one of the most dangerous areas of Baghdad. For 15 months, Pulitzer Prize-winning reporter David Finkel was with them, following them almost every grueling step of the way.

The resulting account of that time, The Good Soldiers, is a searing, shattering portrait of the face of modern war. In telling the story of these soldiers, both the heroes and the ruined, David Finkel has also written a classic work of war reporting.

"[A] ferociously reported, darkly humorous and spellbinding book - You will be able to take this book down from the shelf years from now and say: This is what happened. This is what it felt like." (New York Times)
"Brilliant, heartbreaking, deeply true. The Good Soldiers offers the most intimate view of life and death in a twenty-first-century combat unit I have ever read. Unsparing, unflinching, and, at times, unbearable." (Rick Atkinson, author of In the Company of Soldiers)
"Unsparing....This wrenching account brings alive not only the horror of roadside bombs and mortar blasts, but the oft ignored aftermath of grief and suffering." (Michael Kenney, Boston Globe)

What listeners say about The Good Soldiers

Close to the best audiobook I have listened too. Graphic descriptions of the war, of the effects on those who took part, on their families and friends. Gives an honest and at times gut wrenching look at what the newspaper and tv media do not report on. The narrator is also to be complimented on his delivery. David Finkel, thank you for this up close insight into "the surge"

An Very Poignant Look at the War in Iraq

This could well be one of the most powerful audiobooks that I have listened to about the war in Iraq. It offers a very poignant look at what the soldiers and their extended families are living through, and the detail and emotion in the stories is very powerful. Its accounting of daily life in Iraq, whether of a soldier or an Iraqi citizen, and the often tragic occurance, results in a very balanced look at the war - regardless of one's political view. Finally, the narration of the audiobook is excellent and makes it very easy to listen to.

A good insight into the moral and ethical chaos of war, the camaraderie of people amidst that chaos and the ambiguities that ensue.

Really enjoyed this audiobook. Mark Boyett is a great narrator and the story is first class, both inspiring and heart wrenching.

The true story of war

Excellent. The story behind the headlines. The story of the men and what happens in war

Beautifully written; content like a twisting knife in the guts. An endless conflict that continues to generate these sad stories.