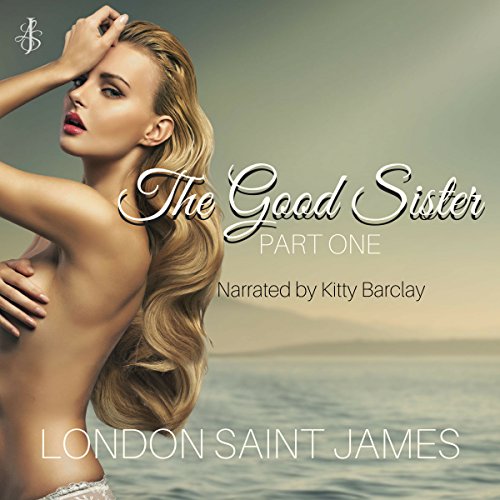 The Good Sister: Part One

Trinity Lane Winslow feared everything and lived her life vicariously through others. She dreamed of the impossible, yearning to be the kind of woman men desired - especially Reid Addison.

Reid Addison feared nothing, except how the mousey little blonde daughter of his housekeeper made him feel. Even though Trinity Winslow wasn't his type, there was something intriguing about her.

Lord Ashton Archer lived a fairy tale life with property all over the world, was heir to a ducal dynasty, and had women fawning all over him. Anything a man could want, he obtained by the snap of his fingers.

By a twist of fate, the three of them find their way into the same illicit world of the infamous Madam Jacqueline Claudette Rousseau. But will they find what each of them truly desires? Or will they always long for the forbidden?

What listeners say about The Good Sister: Part One

Would you consider the audio edition of The Good Sister: Part One to be better than the print version?

I have not read the print edition of this book, but I really enjoyed the audio edition

My favorite character was Ashton, because he fell in love with Trinity since the first day, also he never forced her will.

What does Kitty Barclay bring to the story that you wouldn’t experience if you just read the book?

The awesome performance, the flawless voice changes and inflexion.The accent of the foreign characters

Yes! When Reid tells his secret.

Trinity’s story is very sad, she lost her father and her mind peace in an awful event. Since then her life changed completely, she’s afraid of everything, doesn’t live anymore like an ordinary girl, doesn’t feel pretty in spite she’s frigging beautiful, doesn’t have friends, never have been kissed, etc. It’s so sad, really.The highlight moment of her life is Reid, she’s so in love with him, he’s sexy, funny, courteous, she feels so attracted by him. But he won’t take her because she’s virgin and pure. After a couple of erotic moments between them, he travels to Paris and starts calling her or sends postcards. Trinity little by little is changing, she start to fight with her fears, and takes big decisions.She tells her mother she’s going to visit her aunt, but she travels to Paris after Reid, she needs to find him, changes her look and seduce him. When she arrives to Paris meets a sexy, intriguing woman named Jacqueline, she knows Reid and she offers her help with Trinity’s plan.Jacqueline introduces her in a mysterious world where Trinity will meet who will change her life so deeply. The ugly duckling is going to turn in a beautiful swan.I was dragged into the storyline, so intriguing, erotic, interesting… it was awesome. Trinity’s transformation is exquisite and inspirational. (Needing a Jacqueline here please). The love triangle between Reid-Trinity-Ashton is compelling.Audiobook CommentsI usually don’t like the female narrators performance, but in this case, Kitty Barclair made an awesome job with the book. She captures Trinity’s essence very well, also her voice changes are flawless same case with her accents and inflexions. She becomes in my favorite female narrator so far.

Hotheaded, intense, passionated The Good Sister: Part One by London Saint James is a sensual version of Cinderella story.

So, New Adult is a touchy genre for me. I kind of get annoyed at the immaturity of the characters and the angst. If I had know this was New Adult, I might not have picked it up, that would have been a pity.

It is a really engaging and terrific read. I love Ms Saint James storytelling. Sure, I still had moments where I was annoyed with the story, but I can not deny it was a wonderful reading experience.

Another sore spot is the first person narrative, I generally dislike these, but they are more tolerable in audiobooks. The whole book comes from Trinity's POV, which limits the story in many ways. You only get to know what others are thinking if they tell her. Plus, she has serious angst going on, loads of fears and anxiety to get past. Still she manages to be very likeable. I was routing for her and really could see her growing as the story progressed. I love her unexpected sass!

The book is rather smexy!! Oh yeah, wide open bedroom door! Some hawt voyeurism and seriously steamy scenes!! Hold onto your panties, cause this one is a drencher!

I was kind of take um or leave um about the guys. I wanted to like them, but really thought she could do better. Reid is really tough to like for most of the book, but hang in there he gets better.

I listened to the audiobook narrated by Kitty Barclay, who is fabulous! Her tone is perfect for conveying Trinity and her journey. She has a wonderful pace that moves the book along swiftly. The book is filled with slow moments that her voice makes delightful. I will definitely be looking for more of her reads!!!

Overall, I enjoyed the book, even though the genre is not a favorite. I can however say it was a smooth read that kept me enthralled from beginning to end.

Disclosure - I received a copy of this book in exchange for an honest review. All thoughts, opinions and ratings are my own.

While I didn't expect great literature from a romance novel this one was beyond credibility. What started out as a nice story about a troubled girl trying to find a way out of her fears morphed into a ridiculous story about a madame with a heart of gold and an English Lord who falls madly in love with an American girl with a high school education and nothing much to say.

I don't think this one was worth the credit.