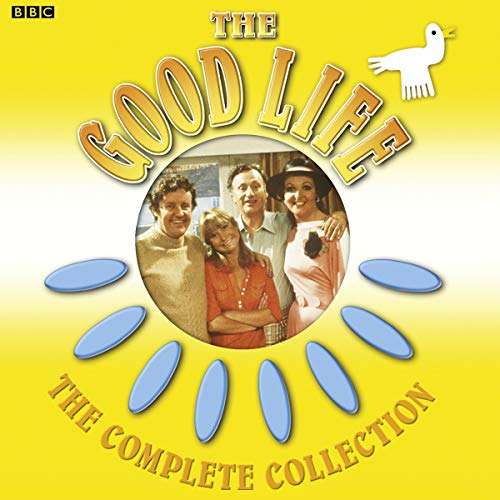 The Good Life: The Complete Collection

The Good Life: The Complete Collection

Meet Surbiton’s most famous residents: Tom, Barbara, Margo and Jerry. It is Tom Good's 40th birthday, and he feels thoroughly unfulfilled. If only he can discover what 'It' is, and if he can, will his wife Barbara agree to do 'It' with him? The subsequent and sudden transformation of the Goods’ home into a smallholding causes consternation for Margo and Jerry next door, and they decide it’s their duty to interfere....

The escapades of the mismatched next-door neighbours whose friendship is constantly being tested to the limits are collected here with 30 hilarious episodes from the much loved BBC television series.

Series One: Plough Your Own Furrow, Say Little Hen, The Weaker Sex?, Pig’s Lib, The Thing in the Cellar, The Pagan Rite, Backs to the Wall.

Series Three: The Early Birds, The Happy Event, A Tug of the Forelock, I Talk to the Trees, The Wind-Break War, Whose Fleas Are These?, The Last Posh Frock.

Series Four: Away from It All, The Green Door, Our Speaker Today, The Weaver’s Tale, Suit Yourself, Sweet and Sour Charity, Anniversary.

This is a memorable collection of 'The Good Life' television series episodes. Unfortunately, much of the humour is visual and is therefore difficult to imagine from 'noises off'. Using Penelope Keith as the narrator is a mistake quite apart from the fact that in many instances her voice can't be heard over the noises she is attempting to describe. As one of the main characters (which she performs exceptionally well), it's inappropriate and confusing to also use her as the narrator. Her upper-class British accent doesn't lend itself well to voice-overs even though it's excellent when in character.

The entire 14 hours is a feast of the best British entertainment.

This is literally the audio from the TV shows, with Penelope Keith (Margo) adding some voice-over to describe some on screen events so you know what’s happening.

An enjoyable result if not quite what I was expecting.

I Adore the Show & Loved the Audiobook!

This is one of my top ten favorite Britcoms and I was so happy to see it in Audible. I love that it’s audio of the show and BONUS JONAS Penelope Keith describes visuals when necessary. What a treat to listen to at work! 👏🏼👏🏼😊

First of all, you should be aware that this is the audio track of the television series with minimal added narration. I saw the original series when it came out, so I can visualize the characters well. However, those unfamiliar with the TV show must make allowances. The show hilariously exploits the culture clash between the back-to-the-land couple and their "I'll have a cocktail now" neighbors. It is a good show to hear if you have ever thought about "going off the grid", as it is now known.

Loved the Audible as much as the original programs. Penelope Keith's a superb narrator always.

One of the best things I’ve bought on audible to date. It made me laugh out loud. It is the same as the TV series so I had heard the stories/ plots before, but not since I was a teenager and I really enjoyed listening to it all again. Highly recommended if you loved the show.

Great fun - audio taken from the show with Penelope Keith giving the occasional narration. Fun to listen to and as charming as I remember it to be.

A walk down memory lane

I remember, vividly, watching the Goods go about their self sufficiency life style with Geraldine the Goat and Lenin the wandering cockerel and a pink pigsty. Margo’s frequent shocks at what she saw and her cries of Jerry! This collection has been a wonderful walk down memory lane and a reminder of what good quality entertainment is all about. It’s also a reminder about being friends regardless of your differences.

Transported me right back to my childhood on a Sunday night. Go Goods and Ledbetters

Took me back to my childhood. A delight to listen to, full of charm and humour.

they dont make comedies like this anymore clean fun but educational shame Richard briars has gone.

Although the narration is a bit ‘watch with mother’ like, you do get used to it, and there’s not too much, not enough to spoil the dialogue or the comedy. I really enjoyed listening to the episodes, a lot of comedy for the money

Always loved watching this program, loved listening to it even more, laughter all the way

This doesn't work without the the pictures to go with it.
Penelope Keith's interjections of narration here and there interfere with the story and the comedy and are dull.