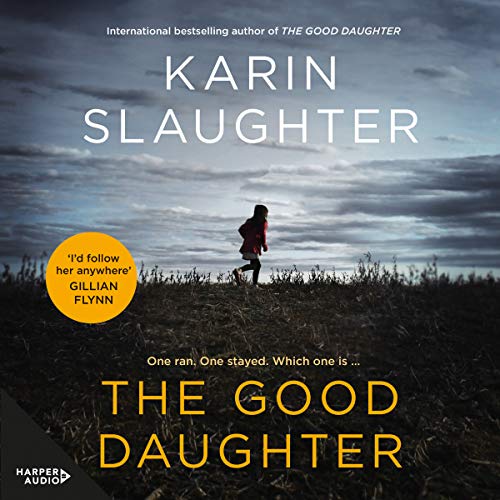 The stunning new stand-alone, with a chilling edge of psychological suspense, from the best-selling author of Pretty Girls.

Two girls are forced into the woods at gunpoint. One runs for her life. One is left behind....

Twenty-eight years ago, Charlotte and Samantha Quinn's happy smalltown family life was torn apart by a terrifying attack on their family home. It left their mother dead. It left their father - Pikeville's notorious defense attorney - devastated. And it left the family fractured beyond repair, consumed by secrets from that terrible night.

Twenty-eight years later, and Charlie has followed in her father's footsteps to become a lawyer herself - the archetypal good daughter. But when violence comes to Pikeville again - and a shocking tragedy leaves the whole town traumatized - Charlie is plunged into a nightmare. Not only is she the first witness on the scene, but it's a case which can't help triggering the terrible memories she's spent so long trying to suppress. Because the shocking truth about the crime which destroyed her family nearly 30 years ago won't stay buried for ever....

"A compelling thriller with immense heart.... The Good Daughter is To Kill a Mockingbird times 100 - dark yet endearing and a classic of its time." (Australian Women's Weekly)

"This is a great writer at the peak of her powers. Karin Slaughter is at her nail-biting, heart-stopping, emotionally draining best." (Peter James)

"Simply the best book you'll read all year. Raw, powerful, and utterly gripping - yet written with a tenderness and empathy that will break your heart." (Kathryn Stockett, best-selling author of The Help)

Praise from authors for Karin Slaughter

"One of the boldest thriller writers working today." (Tess Gerritsen)

"Her characters, plot, and pacing are unrivaled." (Michael Connelly)

"Fiction doesn't get any better than this." (Jeffrey Deaver)

I have read a number of Karins books and have loved everyone of them....... but this... this blew them all away. AMAZING. It had me riveted from the very first chapter. Every chapter kept me wanting more. I couldnt recommend this book enough.
But as a small warning, if you are not familiar with her work, she explains violence in the book graphically.

Is it too soon to listen to it again?


I enjoyed this book of Karin Slaughters - even more so than any of her other books, and I did not think this was possible.
A small town, family of lawyers, secrets and murder. If you enjoy John Grisham then this one is for you, too.

The narration is awful

I could barely finish this as the narrator was so bad. She sounded so bored and listless. I seriously took ages to finish it as her voice bothered me so much. Give it a miss, story isn't strong enough to carry the poor narration.

I enjoyed this book. The twists and turn kept me coming back. Wish it never ended.

Really good book. I wish that we found out all the answers to the crimes in the book but nonetheless 10/10 read!

Best psychological thriller mystery I have ever read

Excellent story line, character development and psychological insight into twisted themes. Narrator had you hearing the true voice of every character.

Superb story, perfectly narrated. Thoroughly recommend.
The author is a seasoned crime writer. This is a stand-alone novel (for obvious reasons) and the plot is clever. Not for the fainthearted as the murder scene is extremely graphic.

I could not stop listening. What an intelligent and captivating story from the first to the last page.

couldn't stop listening, really enjoyed the plot, so many twists and turns. A great read

Really enjoyed the story although at times some of the characters frustrated me a bit. Some aspects were tied up a little too neatly at the end but overall a good read.