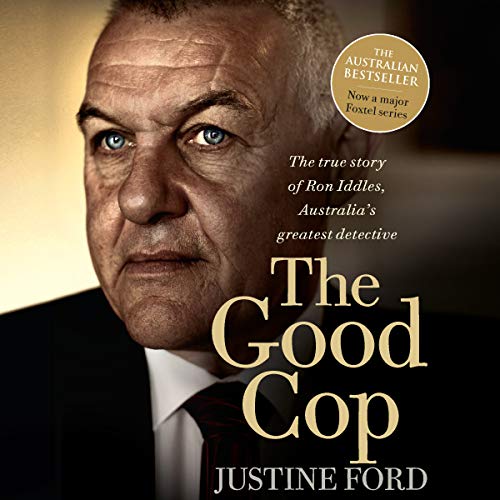 'A - Assume nothing. B - Believe nothing. C - Check everything.' (Ron Iddles)

In an incredible 25-year career as a homicide detective, Ron Iddles' conviction rate was 99 percent. Yet that only partly explains why Iddles is known to cops and crims alike as 'The Great Man'.

Tough, inventive and incorruptible, stoic in the face of senseless horror yet unafraid to shed tears for a victim, Ron has applied his country cunning and city savvy to over 320 homicide cases - some of them the most infamous, compelling and controversial crimes in the nation's history. To the victims of crime, Ron is both a shoulder to cry on and an avenging angel.

Ron Iddles never gave up on a 'lost' cause. He became a regular on the nightly news - the dogged face of Australian justice. Working long hours, dodging bullets, chasing leads and outwitting killers, Ron would tell his teams: 'The answer is just one call away'. And in 2015, that belief saw him crack Victoria's oldest unsolved homicide, yet another remarkable feat in a life devoted to keeping the public safe.

This is the extraordinary inside story of a real crime crusader. Ron Iddles. The Good Cop.

Makes Ron sound like he was naive his whole career and surprised by his success.
Ron was a dedicated brilliant man who deserves his story read by someone who knows how to narrate.

What an amazing man!

I loved The Good Cop! What a humble, compassionate & clever man Ron is. A true gentleman who has clearly touched so many peoples lives.

Ron comes through as a genuine and all round decent bloke. Well written and narrated. Only shame is that it isn't long enough!

A genuine One in a Million man

This is a man that I admire and want to meet, what an amazing person

Good book. Not too heavy on the childhood content as a lot of biographies are. Occasionally the narrator can be a touch on the annoying side and feel his "female" voices don't really do justice to the women he's quoting.

Sadly no where as good as the podcast which is about the murders Ron Iddles was involved in and they were solved.

The narrater is monotonous and the book is largely focussed on “how great” Ron Iddles is to the point it borders on being narcissistic (or the the author has an undisclosed love of Ron?)

Unfortunately I couldn’t finish the book.

I thought this story was so underdone .A lot more could have been made over this extensive period.

Thoroughly enjoyed this listen. Peter Hosking did a wonderful job narrating this book. I encourage you to enjoy.

Not all hero’s wear capes

Wow... I couldn’t put it down. This book is the story of Ron’s upbringing, joining Vic Pol and his incredible career with the Homicide Squad. As he told his story, I was amazed at his level of commitment, kindness and compassion to the Police Force, victims and their families and suspects. The Good Cop is the perfect title - Ron Iddles is definitely one in a million.

I was enthralled the entire listen! Very few people could be a homicide detective let alone one with exceptionally high standards, empathy and unwavering dedication for the long haul. Learning all about the unique career Ron has lead was both fascinating and inspiring. Justine Ford must be commended for her skill in piecing this together so very well. The narration was also first rate. A genuine, gritty and insightful listen that may just be my favourite read of 2019.