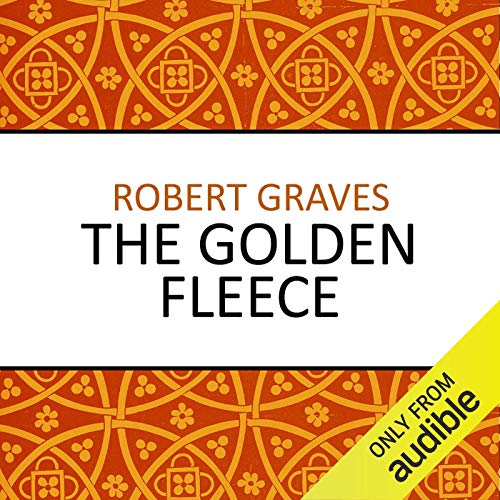 In order to reclaim his father's kingdom, Jason has been sent on an impossible mission: to take the golden ram's fleece that lies far away, guarded by a dragon. Jason, who is so attractive that women fall instantly in love with him, sets sail in the Argo, along with the greatest heroes of ancient Greece, including the surly (and often drunk) Hercules, the enchanting musician Orpheus and the warring twins Castor and Pollux. As they battle clashing rocks, monsters, and seductresses, watched over by pitiless gods, they will learn that victory comes at a price. In The Golden Fleece Robert Graves transforms Greek myth into a thrilling and richly imagined story, bringing the ancient world vividly alive.

Robert von Ranke Graves (24 July 1895-7 December 1985) was an English poet and novelist, scholar, translator, and writer of antiquity, specialising in Classical Greece and Rome. During his long life he produced more than 140 works. Graves's translations and innovative analysis and interpretations of the Greek myths, the memoir of his early life, Good-Bye to All That, and his speculative study of poetic inspiration, The White Goddess, have never been out of print. Graves earned his living by writing popular historical novels, including I, Claudius (for which he was awarded the James Tait Black Memorial Prize), King Jesus, The Golden Fleece and Count Belisarius. He was elected Professor of Poetry at Oxford in 1961 and made an honorary fellow of St John’s College, Oxford, in 1971.

"Shows the legendary cruise as one of the bawdiest, bloodiest, most boisterous expeditions of all time." (Time)

What listeners say about The Golden Fleece

Graves was a scholar of ancient lit and history and myth and I like the realistic approach to the story. and then you also see how these events would lend themselves later to the myths. I would say however that the first 1/3 of the novel was more interesting for me as he dealt with many explanations of how certain rituals etc evolved and their purposes and meanings. as the story progressed this element faded somewhat amid the storyline and the whole thing went on a bit too long, got a bit too drawn out and dry.

I found myself wishing for Mary Renault's King Must Die and Bull From the Sea, similar in the more realistic approach to events and how they became the myth of Theseus, but in general I was more engaged in her novel pair and would love to revisit them, hopefully they'll show up here some day.

and though there is some controversy and disagreement over Graves ideas concerning myths and origins and meanings, I find his ideas compelling. His Greek Myths is very interesting and detailed and thought provoking even if the root of controversy.

and there is an interesting historical appendix in the novel that is for some reason excluded from the audio, wherein Graves outlines some of his reasoning for certain elements in the story, wish it had been included, but perhaps of interest more to me than others.

A great tale for the imagination

Graves is so wonderful in his writing; how it stays with you. My girlfriend and I did a 6hour session on a longhaul flight - I recommend this experience Great reader, Thanks Nigel

"But remember, no lies! The dead may speak the truth only, even when it discredits themselves." So ends the "Invocation" that begins Robert Graves' The Golden Fleece (1944), Graves having asked the ghost of Little Ancaeus, the last survivor of the Argonauts, to "unfold the whole story" of their quest to retrieve from far Colchis the sacred Fleece. The account begins years after the famous voyage with the death of Ancaeus, when he tried to live among the Maiden, Nymph, and Mother worshiping people of Majorca, because on his home island of Samos the Triple Goddess had been replaced by the Olympian pantheon. Ironically, the priestess who interviews Ancaeus decides that his knowledge of "indecent" and "topsy-turvy" Greek culture (in which, unbelievably, people worship fathers and women are forced to marry men and remain faithful to them and let them ride on top when making love) is too dangerous to let loose on her island and so has her Goat men servants stone him to death.

The conflict between the original Triple Goddess and matriarchal culture of the Mediterranean on the one hand and the Olympians and patriarchal culture of the invading Greeks on the other moves the entire story of the Golden Fleece. Readers who can remain patient through a few chapters of such "historical" context setting are in for a treat, for The Golden Fleece is a bawdy, beautiful, comical, exciting, and violent adventure set in the ancient age of myth, a "real" account of events before they were transformed into legends, an exotic travelogue, and a satiric clash of cultures and genders. And it's just so full of life in all its brutality, brevity, humor, and pathos.

The Golden Fleece is an encyclopedic novel of all things Greek and pre-Greek. Graves incorporates or refers to many myths and legends, from the cosmogony through the trade war between Troy and Greece and the Twelve Labors of Hercules. And from various cultures, including Pelasgian, Cretan, Thracian, Colchian, Taurean, Albanian, Amazonian, Troglodyte, and of course Greek, he works into his novel many interesting customs, about fertility orgies, weddings, births, funerals, and ghosts; prayers, sacrifices, omens, dreams, and mystery cults; boar hunting, barley growing, trading, and ship building, sailing, and rowing; feasting, singing, dancing, story telling, and clothes wearing; boxing, murdering, warring, and treaty negotiating; and more. It all feels vivid, authentic, and strange.

Because Graves writes the novel from the point of view of someone living in the time and place of the Golden Fleece, many fantastic things are recounted matter of factly. For example, people who eat sacred oranges in the sacred manner live as long as they want, gods and goddesses speak to people through oracles and dreams, an augur can understand the speech of birds, Hercules has superhuman strength, and so on. Graves also realistically treats some traditionally fantastic things. For instance, hybrid creatures like centaurs, minotaurs, and satyrs are men belonging to horse, bull, and goat fraternities; cyclops are smiths who squint while doing their work; any woman can cow men by making "gorgon grimaces" (distorting her face and hissing); the sons of gods were born to prostitutes of the temples of those gods; and so on.

And the heroes are so human! Butes the bee keeper loves honey too much. Idas provokes everyone (even Zeus) with his obnoxious jests. Sharp-eyed Lynceus doesn't warn anyone about the malevolent ghosts only he can see. Atalanta the virgin huntress sends mixed signals to Meleager. Echion the herald speaks so smoothly that he believes his own lies. "Accidents" happen to people who get in the way of Peleus. Hercules doesn't know his own strength, is prone to berserk rages, harms more friends than foes, and suffocatingly loves his boy-ward Hylas. Jason is an indecisive, sullen, "wild and witless young man," envied or despised by other men. No great warrior, seaman, painter, orator, or wizard, he leads the Argonauts only because women fall in love with him at first sight, a gift he abuses by using the same "my heart began a golden dance" pick up lines on different women and then loving and leaving them. The jealousies of the heroes are potent: "'How generous you are, prince Hercules,' cried Jason, wishing him dead and securely buried under a towering barrow of earth and stone." Indeed, Orpheus is vital to the quest because he must regularly calm the Argonauts with his music when their egos spark conflicts.

The Golden Fleece is rich with epic similes: "After so long a period of abstinence, [the women of Lemnos] are wallowing in the pleasures of love as Egyptian crocodiles wallow in the fertile ooze of the Nile."

And with pithy lines: "For drunken men have short memories."

And with vivid descriptions, whether beautiful ("Here the mountain, which was shaggy with wild olive and esculent oak, sloped sharply down to the sea, five hundred feet below, at that time dappled with small banks of mist, like sheep grazing as far as the horizon line"), spare ("The wind made the pyres roar lustily, and soon there was nothing left of the dead men but glowing bones"), or sensual ("The orange is a round, scented fruit, unknown elsewhere in the civilized world, which grows green at first, then golden, with a hot rind and cold, sweet, sharp flesh").

Nigel Carrington gives an excellent reading of the novel, speaking an elegant and educated British English for the aristocratic heroes, a gruff, boneheaded, and crafty voice for Hercules, a crude cockney for the savage boxer King Amicus, stately voices for the Goddess and her priestesses, and so on. Every pause and emphasis and trick he employs enhances the story.

Fans of Robert Graves' other novels, like I Claudius, or of Greek myths and culture, or of exotic historical adventures, would probably enjoy this book.