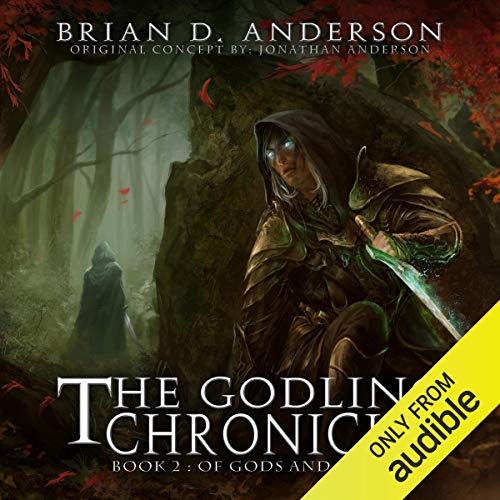 The Godling Chronicles: Of Gods and Elves, Book 2

The Godling Chronicles: Of Gods and Elves, Book 2

Armies gather for war in the frozen land of Angrääl, threatening to set the world ablaze. The elves are divided and scattered, and humans fall prey to the dark influence of the Reborn King. Now, Gewey is faced with his greatest challenge yet: unite the world of elf and human before it is too late....

What listeners say about The Godling Chronicles: Of Gods and Elves, Book 2

I listened to the first book and thought, "meh". It was neither a great book nor a horrible one. I decided to give book 2 a whirl, just in case it was a slow starter. Can't say as it was worth it. The book has a decent story line, nothing super original, and alright characters. However, there was nothing and no one that made me want to keep coming back. Except the fact that I hate not finishing a book. The transitions between the books are odd as well. Typically, the author builds to some kind of climax, then has some kind of resolution, though obviously leaving something unresolved for future books. Right? This one just seemed to stop mid adventure...both times!! Weird.

the main story line is sound but the progression is slow and although the reader tries to bring life to the book the slow movement kills the enjoyment this story could be.

Of Gods and Elves (The Godling Chronicles, #2) by Brian D. Anderson, narrated by Derek Perkins, continues the story of Gewey, Kaylia, and the elves. So much is prejudge as it is here, human vs elves and visa versa. More battles of the Reborn King servants sent to attack them. Gewey is learning his powers. I really, really love this series. I love how the author makes the characters so real and you get to like them, or hate them, and they become part of your life. At the end..oh, I got mad! How dare this new up comer! Must read for epic fantasy lovers. This is an audible book and the narrator can go from deep noble's voice to quiet elf voice and I forget it is from one person! I forget it is narrated, I feel like I am listening to the real thing! The narrator adds so much to an already rich story! This is a fantasy series I am glad I came across, I would have been a great loss in my reading mind.

I wrote a review for this one already. Obviously, it didn't publish. I'm writing this review now having just finished the 3rd book.

I'm very glad my original review of book two didn't publish. I'd given it 3 stars, as I did book one, and listed what misgivings I had while watering them down with things I'd hoped to see in book three.

I found those things.

I can say for certain now that if you are unsure about this series, for whatever reason, you should definitely keep going until you get to book three, by the end of which you should have fully formed your opinion.

For me, I really like it. It grows more complex and unpredictable with every chapter, noting that I believe there is a difference between predictable and inevitable regarding storytelling.

More enjoyable than the first.

More enjoyable than the first. Moved right along. Starting the 3rd A. S. A. P.

Would you try another book from Brian D. Anderson and/or Derek Perkins?

No, Brian Anderson needs a cleaner plot, richer characters, and better plot development. Aside from the formulaic plot development, the characters are massively inconsistent going from bigotry against another race to despising others with this same bigotry in a matter of days! Characters have compelling need to go to certain cities...who knows why, but its always in the teeth of danger. The plot gets dragged, and dragged, and dragged through pointless interchanges and obnoxious turns that add nothing, but deflate interest. The verbal interchanges are really weak too.

Has The Godling Chronicles: Of Gods and Elves, Book 2 turned you off from other books in this genre?

No, just the author.

Which character – as performed by Derek Perkins – was your favorite?

His performance is okay, a bit weird with some voices.

Do you think The Godling Chronicles: Of Gods and Elves, Book 2 needs a follow-up book? Why or why not?

It needs one, but I won't read it/listen to it.

It gets worse after book one...turn back now.

A Great Adventure and a GREAT Narration

I really enjoyed the first book. For whatever reason, I really like the characters - their personalities, who they are, and what they are doing - so, I did enjoy this book because I was with them again and learning more about them. To be honest, mid way - I lost track of where they were going and why - there was a lot of side-bar action going on that may have diluted that message, or it was just me. It seemed that the end of the book was what the book was really about and it just took a lot of time to get there. I will get the third book - no doubt, Derek Perkins does an exceptional job - he really makes the book come alive for me.

The Godling Chronicles of Goes and Elves, Book 2

Awesome story line full of good vs evil! Great narrator! Can't wait for the next book!

I am literally going through these books like water. I can't get enough. Great storytelling with great characters. Now Book 3

Not bad, but plenty if time needed for someone to digest all the aspects if the story.

poor even by fiction/fantasy standards

people with limited intelligence or age

What could Brian D. Anderson have done to make this a more enjoyable book for you?

should have read what he wrote and realized it needed burning with fire.

not much. a dry heaving cat with asthma is more entertaining than the narrator.

this like cow tipping should be a thing u consider but never go through with,