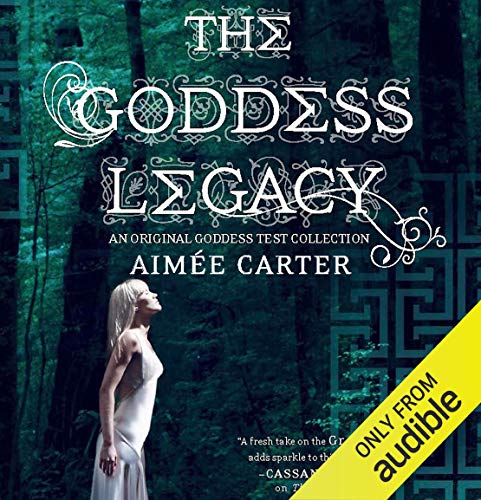 For millennia we've caught only glimpses of the lives and loves of the gods and goddesses on Olympus. Now Aime Carter pulls back the curtain on how they became the powerful, petty, loving, and dangerous immortals that Kate Winters knows.

Calliope/Hera represented constancy and yet had a husband who never matched her faithfulness….

Ava/Aphrodite was the goddess of love, and yet commitment was a totally different deal….

Persephone was urged to marry one man, yet longed for another….

James/Hermes loved to make trouble for others - but never knew true loss before….

Henry/Hades's solitary existence had grown too wearisome to continue. But meeting Kate Winters gave him a new hope….

What listeners say about The Goddess Legacy

This series has been one of my favorites by far

Amazing and really great narrator. It was so easy to get lost in the story!

Interesting Back Story for Current Characters

Where does The Goddess Legacy rank among all the audiobooks you’ve listened to so far?

When I first started listening to this audio book I thought it would be my least favorite in the series, probably because it starts out with Hera who is just a character you can't feel much sympathy for at all because she's so... Whiny? I just dislike Hera, even though the background is supposed to make you feel a little bad about the way she was treated by Zeus (going off quite a bit of history here) and there was nothing the author could do to make me feel bad for her at all-she was that unlikeable.

However, I enjoyed all of the other stories and listening to the background on some of the other characters-it was a fun little addition to the series!

She really embodies the main character.

What made the experience of listening to The Goddess Legacy the most enjoyable?

Hearing the perspectives from the major players' perspectives and not having to listen Kate's inner monologue.

Hades--even with the self-loathing--which is definitely understandable. He doesn't have the go that his brothers have.

The talk between Hades and Persephone. That's all I say in the interest of avoiding spoilers.

Yeah. It took me a day to complete.

There are all Greek Gods that we are familiar with. However, the third book in the Goddess Test series does a pretty good job of fleshing them out. So good, in fact, that it made me muse what separates us mortals from the Gods, if they are just as prone to "human" emotions such as jealousy, loneliness, despair and hatred?

When I finished the previous book, Goddess Interrupted, I was torn between frustration at Aimee Carter for depicting the Greek Pantheon as petty, jealous Gods. Heck, part of the reason why I had to pull away from the Dark Hunter series is because my vision of Artemis was tainted. But no, Carter's depiction of Hera aka Calliope, makes Kenyon's Artemis look like a child throwing a tantrum when she doesn't get her way.

In Legacy, Carter gives us the four different POVs from each characters' perspectives. She gives us their motivation for their deeds in the events from Goddess Test up to Interrupted. She does a decent job of fleshing out their characters (without all the abuse and turmoil that the Dark Hunters series has) and shows that even though they are immortal, powerful, beings? They still have feelings.

Due to the way Persephone was depicted in Interrupted, I didn't like Carter's depiction of her. She appeared as petty, selfish and conniving. She's that girl in high school that you can't stand and want to slap so hard that she goes flying against the opposite wall. Yet, when we get her take on what happened, you can sympathize with her.

The only God I cannot reconcile with is Zeus. He's depicted as egotistical, possessive, over-bearing and shrewd. I don't care if he has good reasons for what he does, I just don't like him.

As for the writing? Carter does seem to improve with each book but man, Kate? She is annoying and sometimes dense. She seems incapable of viewing the big picture before she reacts. Which leads her to do REALLY stupid things!!!

My favorite character is Hades. I love how he doesn't speak using colloquialisms or contractions. He's very formal. He sort of reminds me of Vincent Valentine with the brooding, self-hatred thing he's got going on. Yet, he's the most rational out of all them. He has less of an ego and I like that.