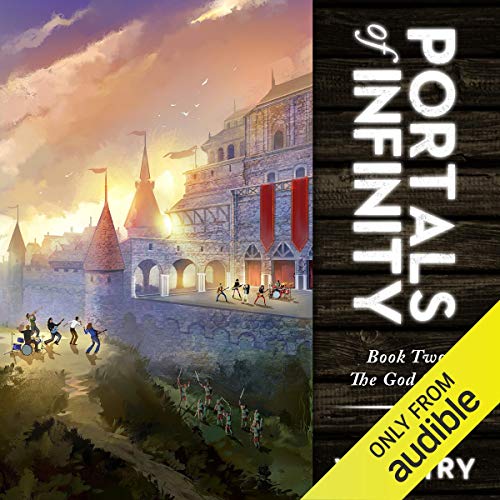 Will's life has definitely changed since that day he went hiking in the woods of Pennsylvania. He's discovered that reality is a lot bigger and stranger than he had ever imagined. Learning about the portals that link the infinite number of worlds opened his eyes to that wider reality. Learning that he was being groomed to become the Champion of a God in one of those realities was an even more startling discovery.

But now it's time for him to pay the bill for his recruitment. Just as the Gods on a single world fight and jockey for power and position, the older Gods from the many different spheres of the infinite play a much larger and more complicated game. The Goddess Aryanna has a quest she needs completed, and William and four other Champions are the ones tasked to do it.

What bothers Will however is what could a Goddess possibly need? And why would it take five Champions to retrieve it?

I've finally finished both books and enjoyed them very much. There were time when you had to laugh at some of the things going on but it was still very good. I hope the author doesn't stop here I'm kind of interested in hearing more about Will or Wilma.

What made the experience of listening to The God Game the most enjoyable?

The depth of the story, the emotion, and the heroism and general bad-ass moments give a sense of heck-yeah to the whole series

The main character is clearly the favorite :)

really enjoy the story, definitely some interesting aspects to this book. narration could have been better

This is a nearly perfect book! The characters are interesting, the plot is marvelous and fully realized and the narration is excellent! Many twists and turns that kept me engaged and it was nicely tied up at the end! Excellent! I can’t wait to see where we go from here!

This was a very well conceived story from many angles. I liked how it tackled a lot of different topics. And I'd like to clarify my rating. I deducted one star from the performance of this audiobook not because the voice actor did anything wrong but more because the editing was done strangely. The voice actor did a wonderful job and I would give him five stars. But whoever edited this together put in a lot of strange and unnecessarily long pauses when one person stops speaking and another person starts speaking.

I love this concept

There are few other books in this series and I checked those out as well. So far I really enjoyed this series, the characters are cool, the dialogue is believable, it has a great flow, and there's a lot of emotion in it. The narrator does a great job of having different voices for each of the characters and maintaining the same character voice through the series as well.

the gender bending music fight didn't flow with the storyline was really boring, but overall ok not as good as the 1st book

I love everything this author write and this book does not disappoint! Great characters, great worlds, great magic, great plot. Great book all over!

Where does The God Game rank among all the audiobooks you’ve listened to so far?

This is one of the highest ranking audio books that I've listened to.

Will is definitely a favorite, as he's the MC, but also because he goes on adventures, and just basically does what a lot of people dream of doing.

Rob's voicing of the characters really bring them to life and make listening to this book a fun time.

An ancient secret lost, these champions mean to find.