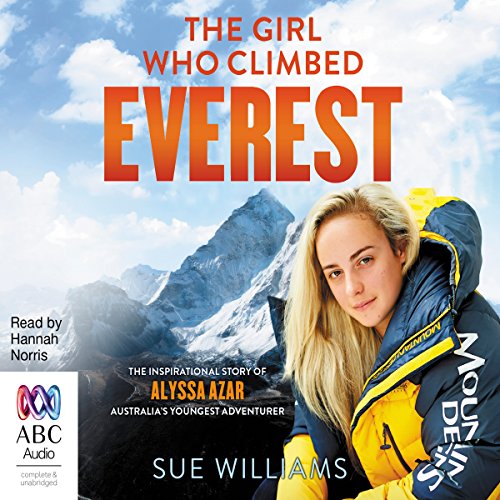 The Girl Who Climbed Everest

The Girl Who Climbed Everest

The inspiring story of Alyssa Azar, an ordinary girl from country Queensland who worked to ascend the world's highest peak.

'I believe that nothing is impossible if you dare to dream, plan and take action. I'm an ordinary girl who simply refused to give up on a dream, and that's all it takes to succeed in life.'

Alyssa Azar is unstoppable. When she was just eight years old, she walked the gruelling Kokoda Track, the youngest person in the world to do so. At 12 she climbed the 10 highest peaks in Australia. Two years later she touched the top of Mount Kilimanjaro. Now, at the age of 19, she has reached the roof of the world: the summit of Mount Everest.

The Girl Who Climbed Everest is the inspiring story of how an ordinary girl from country Queensland worked towards ascending the world's highest peak. Through passion, determination and immense hard work, and despite being turned back twice - once by a deadly avalanche and the second time by a devastating earthquake that nearly claimed her life - Alyssa is the youngest Australian to have achieved this extraordinary feat. She shares the thrills and heartbreaking disappointments on the road to reaching her goal and explains how she finds the courage and motivation to keep going in the face of overwhelming danger and adversity. Above all, Alyssa's story shows us that we can achieve anything if we dare to dream big.

Amazing book, inspirational, motivating and most of all realising anything is possible if you put in the hard work. I loved every chapter.

If you’re looking for excuses and can’t get out of bed to achieve something. Listen to this book to know that, no matter the odds. If you want to achieve your goal. Only you stand in the way.