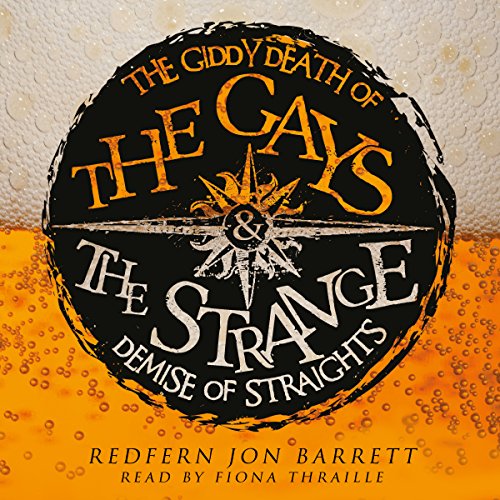 The Giddy Death of the Gays & the Strange Demise of Straights

The Giddy Death of the Gays & the Strange Demise of Straights

Redfern Jon Barrett's novel is a satirical romp through the lives of 20-something queer ne'er-do-wells in Wales. Caroline and her Dom live out their normal lives among the poverty, alcoholics, and street preachers of Swansea. But when Dom and his straight roommate fall in love - a passionate, secret, nonsexual love - their lives are transformed into a queer chaos of cross-dressing, gender bending, and free love. Will Dom hold on to his relationship? Can religious fundamentalists be adopted as pets? And just what are the lesbians up to? The battle between preachers and drag queens, skinheads and sex workers, boyfriend and girlfriend, is set to change the city forever in an inventive story that embraces queer life today.

I really enjoyed the parts of this book set in current time. The characters were likable and the self-exploration and identification each experienced was wonderfully written. I especially enjoyed the romance between Richard and Dom. HOWEVER, I hated the interjecting chapters regarding the future twenty some or thirty something years out. These included spoilers about the main story line and didn't really contribute anything in my opinion. They were distracting at best. I would have given this book five stars if those chapters had been removed and if Rutti's story would have had a bit more of an ending. Rutti's story seemed to stop nearly mid-thought.

Looking for love in unexpected places

What did you love best about The Giddy Death of the Gays & the Strange Demise of Straights?

It's very well written, of course. It's a great look into the changing faces of love and sexuality and how one doesn't always correlate with the other. They also give a wonderful look into the edges at least of polyamoury and how it affects not only the lives of the people involved in the relationship, but the relationships around them.

What was one of the most memorable moments of The Giddy Death of the Gays & the Strange Demise of Straights?

While the actual "linear" story is quite good, there are several flash forwards as well which, while they may spoil a bit of the story, they're very effective and brought me to tears.

Excellent job! Her accent put you right in the midst of Swansea, and definitely makes you feel like you're there. She also never leaves any doubt about who is speaking, differentiating the characters effortlessly.

Phenomenal account of the changing face of relationships in the 21st century. Brought me to tears several times (which isn't good when you're listening while driving!). If you're not used to gender-neutral pronouns, it can be a bit distracting at first while you try to parse them, but trust me, they're there for a very good reason. Well done!

Perpetually In Search of a Book This Wonderful

I loved this book inimitably. Sweet and funny, complicated but clear, and narrated by one of my favorites.
If I had to describe this story in one word I think it would be &amp;quot;unafraid&amp;quot;. Unafraid to delve into the the spectrum of inner experiences and interactions of the characters, getting deep into the heart of sexuality, polyamory, identity and expression, while never losing sight of the inextricable ways the characters were affected by cultural pressures as current events shaped the world around them.
At the same time it filled me with joy and connection, heartbreak and hope.
It was a wonderful.

It's alright. you'll like it well enough, but it's not amazing in any way. Total fine.

Surprisingly enough I enjoyed this book a lot. I listened to it on a sunny day in the Peak District (no, not in South Wales) and I had a few laugh-out-loud moments. First I thought it might be one of those 'gay' books but it's not actually. The book is about this random bunch of gay and straight people, and one who can't decide. It's about friendship, love, social acceptance of homosexuality and everyday life in South Wales. Plus I learned about the difference between homosexual and gay as well as heterosexual and straight (who knew there was a difference??). It's a pretty funny listen and I loved Fiona Thraille's narration in a genuine Welsh accent.

You are never too old for a peptalk

I love this book! I really appreciate the juxtaposition of the grittiness and dinginess of Swansea and its surroundings with the vibrance and vulnerability of the characters. For me it was these kind of juxtapositions that made the novel so real and moving, it felt very much like a literary landscape, harsh, bleak and beautiful. I also enjoyed the little nuggets of philosophy that were thrown in at intervals within the story. I've done Wales and I've done polyamory so to find a book where these two things are so closely linked, it was almost untrue!