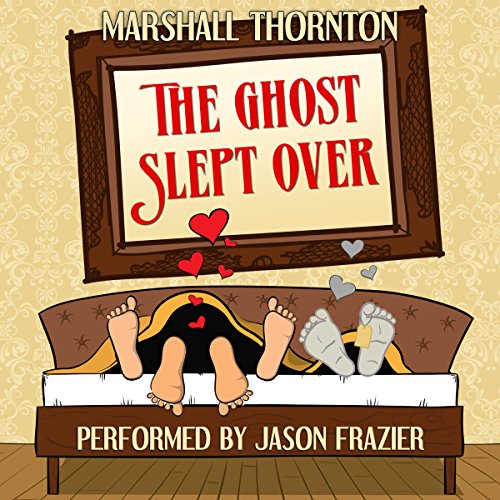 The Ghost Slept Over

The Ghost Slept Over

When failed actor Cal Parsons travels to rural New York to claim the estate of his famous and estranged ex-partner, he discovers something he wasn't expecting - the ghost of his ex! And, worse, his ex invites Cal to join him for all eternity. Now.

As Cal attempts to rid himself of the ghost by any means, he begins to fall for the attractive attorney representing the estate. Will Cal be able to begin a new relationship, or will he be seduced into the ever after?

A Ghost of a Problem

What made the experience of listening to The Ghost Slept Over the most enjoyable?

It is just a really great story with an excellent narrator.

Cal. He was just so real. Thoughtful but determined and quite bolshy at times but in a good way.

Have you listened to any of Jason Frazier’s other performances? How does this one compare?

Laugh. I laughed and smiled all the way through.


I thoroughly enjoyed this! It is really amusing and great fun to listen to, with an excellent narration.

Life is tough and so Cal is very surprised when he finds out that he is the sole beneficiary of McCormack's estate. Cal travels to rural New York to claim the estate and he finds that he is now a very wealthy man because McCormack has left Cal a house, a car and money galore, but the only downside of all this is that McCormack himself hasnt left.

Cal is shocked to find that McCormack is still around as a ghost and this is where the fun begins because Cal wants to get on with his life, but McCormack thinks they should revive their relationship.

Needless to say Cal isnt interested. He came to terms with his split from McCormack and it happened when he was 25. Cal is now 40, much older, much wiser, very much interested in staying alive and very, very interested in McCormack's lawyer Dewey.

Dewey Morgan is executing McCormack's estate. He is quite happy to give Cal advice and act as his lawyer even if Cal is a bit weird and talks to himself, and does odd things like spreading salt on the doorstep. Dewey thinks Cal is grieving and so he decides to support him as much as he can.
Meanwhile Cal is trying his best to get rid of the ghostly McCormack but salt and exorcists don't seem to be effective.

Cal also has to think about his future (now that he is financially secure) and this includes getting used to the local community and theatre group who unbeknownst to Cal are trying their best to see if Cal will give them some of the money he has inherited because they are broke and they have a drama to put on.

Suddenly everyone wants a piece of Cal!

Cal negotiates ghosts, towns people, ex boyfriends, lawyers and everyone else and as he does so he gets to know more about McCormack, Dewey and himself, but how do you get rid of an ex when the ex can pop up anywhere, any time and any place too?

Cal has a ghost of a problem!

I really enjoyed listening to this. It is like cinema for the ears. The narrator brings this romantic comedy to life in a really creative way. As I listened each character came to life and I laughed and smiled was thoroughly entertained. I think this was exactly what I wanted from this story.

Many thanks to the author for providing this via Audiobook Boom in exchange for an unbiased review.

Charming and funny story. The romance is low key and takes second place to the amusing ghost story. Narrator does an excellent job.