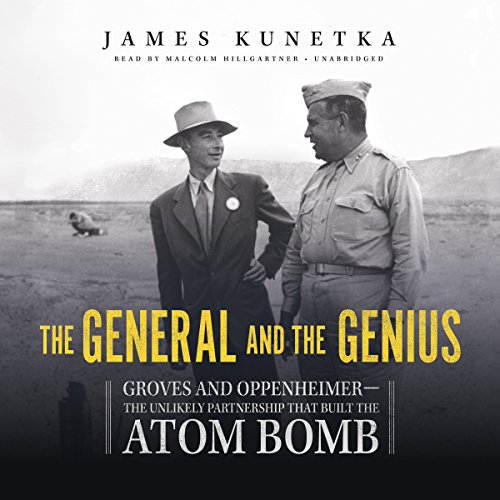 The General and the Genius

Two ambitious men. One historic mission. With a blinding flash in the New Mexico desert in the summer of 1945, the world was changed forever. The bomb that ushered in the atomic age was the product of one of history's most improbable partnerships. The General and the Genius reveals how two extraordinary men pulled off the greatest scientific feat of the 20th century. Leslie Richard Groves of the Army Corps of Engineers, who had made his name by building the Pentagon in record time and under budget, was made overlord of the impossibly vast scientific enterprise known as the Manhattan Project. His mission: to beat the Nazis to the atomic bomb. So he turned to the nation's preeminent theoretical physicist, J. Robert Oppenheimer - the chain-smoking, martini-quaffing son of wealthy Jewish immigrants, whose background was riddled with communist associations - Groves' opposite in nearly every respect. In their three-year collaboration, the iron-willed general and the visionary scientist led a brilliant team in a secret mountaintop lab and built the fearsome weapons that ended the war but introduced the human race to unimaginable new terrors. And at the heart of this most momentous work of World War II is the story of two extraordinary men - the general and the genius.

What listeners say about The General and the Genius

Misleading title - a promise not kept

This is a well written story of the Manhattan Project but it doesn't live up to its title. it's solid and a good read by most of the book is tangential to its promise. The author chooses to talk about so many side shows and side characters he seems to run out of steam to write about what he promised to do so with the book title.

Not exactly about the General and the Genius

As a Title The General and Genius suggests that this book will explore the relationship between the general in charge of the Manhattan Project and the scientist who led the technical team in developing the atom bomb. There was a relationship between the two men but not one of mutual collaboration or friendship beyond the fact that General Groves was in charge and Robert Oppenheimer led the scientific team at Los Alamos. This was not a story about an unlikely partnership. The story is more about the work that went on at Los Alamos from that perspective and with other projects, teams, and General Groves on the periphery. You learn something about Leslie Groves - that he was strictly military and felt that the team at Los Alamos should be under military rule. He felt that without him the scientists would play at experiments, chew the fat around the water cooler, have two hour lunches, and go home at 3. You don't learn all that much about Oppenheimer; he grew up on Riverside Drive, was very skinny, he smoked a lot, he was a scientist, was generally well liked and respected, and got thrown under the bus after the war while Groves more or less watched. That aside you do learn a lot about what it was like to work at Los Alamos for the 2 to 3 years before the bomb was finished, and you do get a good grounding on some of the technical details, obstacles, and challenges. Only at the very end is the question of the use of the bomb in war and controlling it explored and then it becomes fascinating.

This book is not fiction and so the needs of the narration do not require much in the way of accents, change of gender, or drama. The book is very well read by Malcolm Hillgartner with great clarity and a steady pace.

I just started working at LANL. it was awesome hearing this story to and from work and imagining all the work that went on in this area. I passed Bathtub Row and the pond during lunch. it was cool hearing the history behind these sites.

Just a small fact, in Thailand Japan built a railway to Burma, 200,000 died. a number equal to both bombs. All over Asia Japan showed no respect for life.

I really didn’t know that much

I’ve read a lot of history of WW2 but I have to confess I really didn’t know very much about the Manhattan Project. Arguably among the most significant scientific projects of modern time. This book begins slowly much like the project did. As the story is revealed the pace and intensity increases and it becomes a page turner. I learned a lot and I have a much greater appreciation for the challenges that had to be overcome. I have referred to this book in several conversations recently. It’s a good book. Give it a try.

Great story. Well told. Incomprehensible evil. To use the bomb as they did. Forever shame.

Important story about the development of nuclear weapons

The General and the Genius: Groves and Oppenheimer--The Unlikely Partnership That Built the Atom Bomb, by James Kunetka (2015, 14 hours audiobook). This is a deep dive into the genesis of the Manhattan Project, the work of multiple laboratories supporting the development of atomic weapons with a focus on Los Alamos Labs, the deployment of the bombs dropped on Hiroshima and Nagasaki, and the postwar nuclear weapons development and international controls, all seen through the lens of the relationship between and personalities of project head General Leslie Groves and laboratory head Robert Oppenheimer. Well written and a nice complement to the more general The Great Lecture Series audiobook, the similarly titled The General and the Geniuses.

I really good book about the Manhattan project. I enjoyed the adequate amount of technical information for a non-physicist. The book was just the right length and depth.

Keeps your interest without being dry

The personalities of these historical figures have been brought to life and are woven into the narrative with skill. It is obvious the author has researched his subjects and the historical facts surrounding them. I enjoyed the book.

If you like history, you'll love this! Everyone needs to know this corner of history.

Very informative and detailed, but can be dry

James Kunetka's writing makes him sound more like a historian than an author. He meticulously details the events and personalities involved in the making of the atomic bomb, which is pretty interesting on it's own. Because the book is written chronologically, the first half of the book that dealt with logistical and construction issues was kind of boring for me. It picks up as the deadline for the atomic bomb approaches though and reaches its climax at Trinity.

The narrator was good -- he has a dynamic voice and sounds like my favorite professor.

Not as good as the making of the Atomic bomb, but it’s really great. Highly recommended for anyone who is interested in the bomb. The book is not only about Oppie and groves but about all aspects of the Manhattan project