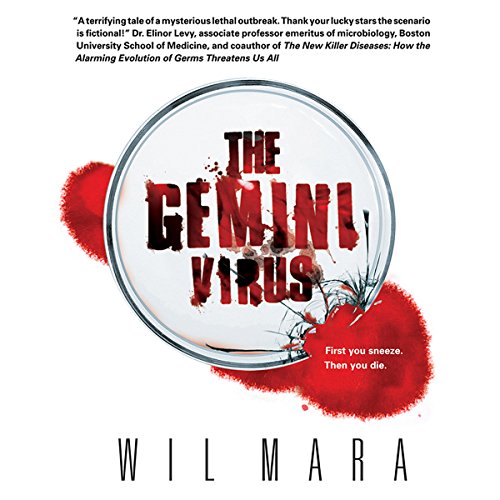 Bob Easton thinks he has a cold. Before he dies in agony, four days later, he infects dozens of people. Local health agencies become quickly overwhelmed by the sick and dying, and beg the CDC for help. Dr. Michael Beck and Cara Porter, a member of the Epidemic Intelligence Service, race to identify the deadly bug. They can't cure it until they know what it is.

Dennis and Andi Jensen and their children are terrified. Schools and offices close. Fresh food disappears from store shelves. Three of their children's friends die. Their neighbors are dying or running away, fleeing the unstoppable infection. Desperate, the Jensens join the exodus, making a nightmarish journey to their isolated mountain cabin along empty roads, through abandoned towns, past looted shopping malls.

The superbug - and the panic - quickly spreads beyond America’s borders. On a packed plane, someone coughs - and at their destination, the pilots are told, "You can’t land here." US military bases are quarantined. Yet the virus continues to spread. Some believe the plague is man-made. Others see it as a sign of the end times.

In the lab, Cara Porter makes a potentially fatal mistake. In the mountains, Andi Jensen tells her husband that she doesn’t feel well. The world is running out of time.

What listeners say about The Gemini Virus

I usually enjoy a book that is narrated by its author however, Dear Wil Mara your story was ok but please next time sound more animated. Your monotone almost prevented me from listening to the full book.

Best viral outbreak book out! I couldn't put it down! I earned my marathoner badge listening to it. the story is phenomenal!

Typical virus story but I enjoyed it.

The best diet book on earth!! The story is very gruesome and the writer describes every virus symptom in great detail. Typical virus story. But if you are a fan of virus books, you would like it very much.

And that is how it happens....YIKES!

What made the experience of listening to The Gemini Virus the most enjoyable?

I liked the story. Seemed realistic. The story moved quickly.

Well, no. Good for Wil Mara for giving it a try, but alas, it didn't do his book any justice.

I would like to hear more of his stories but read by someone else. I'm sorry! You are a wonderful story writer!

If someone suggested to Wil Mara that he read his own book, he might consider examining the relationship; I’d say the person was not thinking in Mara’s best interests. His reading comes perilously close to a monotone, sounding very much like a lawyer that has been hired (not at premium rates) to read out a lengthy legal paper that consists largely of an inventory, plus some narrative bits.
Because that is what this book ends up sounding like due to Mara’s reading; an inventory with a few narrative parts. His bland reading makes the most horrific descriptions --and he’s got some doozies-- come out about as spine-chilling as listening to someone reading the dec page of an insurance policy. His characters don’t have any really distinctive voices, either. His reading isn’t egregiously awful, just….underwhelming. Bland.
That’s a problem with the book as well; the story is told rather than shown, going against that basic creative writing dictum of “show, don’t tell.” There’s a reason creative writing teachers hammer on that concept, and that is that it’s a lot more interesting to be “in the moment,” as it were, to go along with the characters as they experience the story, rather than just have the occurrences listed out.
The characters aren’t particularly fleshed out or 3-dimensional, and have all the vivid life of comic book characters after a trip through the washer; pale ghosts in a fog.
I think the book could be at least somewhat satisfying as an end-of-the-world-by-gruesome-disease horror work, if you read it yourself, or if someone else read it…somebody good at reading.
I had a hard time deciding stars on this one; it's not aggressively bad, neither the book nor the performance. It's not really a strongly negative experience (like some I have run across), just....not good. Blah. "Meh."

The author narrates his own story in this book - and practically kills it. Stick to writing Mr Mara - do not EVER try to narrate your own work!

The story was relatively engaging - you could (with some effort) relate to the characters. It was a typical virus outbreak novel, without the in-depth medical/scientific information that most books of this genre appear to have.

Would you be willing to try another one of Wil Mara’s performances?

No - he has a monotone delivery and does not differentiate between characters - which makes following dialogue (of which there is quite a considerable amount) almost impossible. You cannot work out who is saying what, and the complete lack of emotion conveyed in the delivery means you don't really care anyway.

An interesting story but took a long time to come together and while trying to sound dramatic at times it did not achieve its goal.