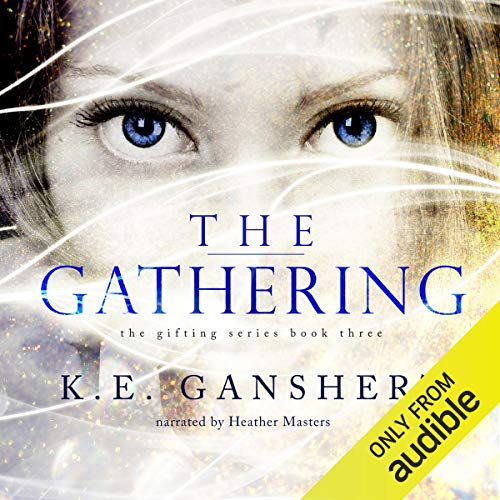 "Darkness is a tricky thing. Especially when it cloaks itself in light."

Luka isn't dead. He's not beyond saving. Tess knows because she saw him with her own eyes. After what she saw, she's sure of one thing: If they don't rescue him soon, Luka won't be Luka anymore.

If only she could convince the other members of the hub. They're not sure Tess saw what she claims she saw. And they're preoccupied by the fact that their kind is being systematically eradicated. Answers lie in an ancient prophecy, one that revolves around a 17-year-old girl who never asked for any of this.

K.E. Ganshert's final installment in The Gifting Series brings listeners on an action-packed journey through loss, sacrifice, betrayal, and the impossible choice between what we want most and what we know is right.

What listeners say about The Gathering

when are the movies coming out?

Loved this series!!!! As intriguing as The Hunger Games and way better than the Divergent series! So i ask? When are the movies coming out?

The best of the series

Overall Assessment:
This is the third book in ‘The Gifting’ series by K.E. Ganshert. This book picks up immediately where the second left off. I really enjoyed the first two books, but this was my favorite. We finally got to see Tess develop into who she was meant to be. Once she accepted who she was, she was a force to be reckoned with. The ending was nice and I thought it wrapped up most story-lines well. You can see in my ‘didn’t like’ section why I said most.

What I liked:
– Again, Tess’s growth – emotional and her abilities
– Heather Masters did a phenomenal job narrating this series. I would listen to her again.
– Like the second book, this one is action-packed. I didn’t ever feel bored during this book. While it was action packed, it also didn’t feel rushed. I thought the pace was about perfect.
– The development of secondary characters. Getting to know Jillian, Link, Cap, and a few new ones was fun. I liked that we got to dive into their backstories or personalities a little more.
– Ganshert wasn’t afraid to take risks with her characters. We lose a couple characters in this book, but nobody’s death felt like it was put in there for shock value (I’m looking at you Allegiant). While heartbreaking, it felt necessary to move the story along and for the character development of Tess.

What I didn’t:
– There was KIND – OF a love triangle, but I didn’t feel like it was completely resolved. I can’t say more than that because of spoilers, but this was the only thing about this book that irked me. Overall, it was fantastic.

Would I recommend this book to family and/or friends?
Yes!

one of the best series I have listened too

loved this series! kept me craving to listen to see what excitement happened next so creative and loved the character development

I plan to listen to all three books again and share the books with several friends.

can't even finish it, she's such a dang brat

I sucked up the continuously annoying main character's self doubt all through the second book because it's not a bad story, but I'm seven chapters in on this one, and I'm out. Tess is one of, if not the most, self serving brat I've ever experienced in a book. Zero concern for anything or anyone except what she wants. Seriously ruined the series because I felt like I was listening about a character that should have been discribed as a five year old with special powers. Terrible example of a strong female lead.

Could have been so much more

The story line was good. Teenage angst was way over the top but not just that. It was repetitive. The main character is easy to emo and whinny. I listened to the whole series and thought that it was good but could have been so much better if the supporting characters were given more depth and the emo main character was not portrayed as so immature. This made the adults that submitted to her will unbelievable.

I absolutely love this series. I laughed, smiled and cried with the characters. I didn't want it to end. I found myself cheering for the happiness of Luka and Tess.

The only thing that's not completely concluded is the part about Summer and how she found out about the grandmother.

This book was so good it gave me chills!

The Gathering was a phenomenal conclusion to a fantastic series!!! I was so invested in the characters by this 3rd and final book that I felt like I was reading about my own real-life loved ones.

There was never a dull moment in this story. It was full of action and kept me on the edge of my seat. There were twists that I didn't see coming, and the ending wrapped up all the loose ends, so I wasn't left with any nagging questions.

Bringing a series to an end is always hard, but I thought this author did an amazing job of it! I will definitely seek out more books from her!

I also highly recommend the narrator. She did a great job of bringing this story to life!

this was an amazing series, I am so glad I stumbled upon it. I would highly recommend it everyone.