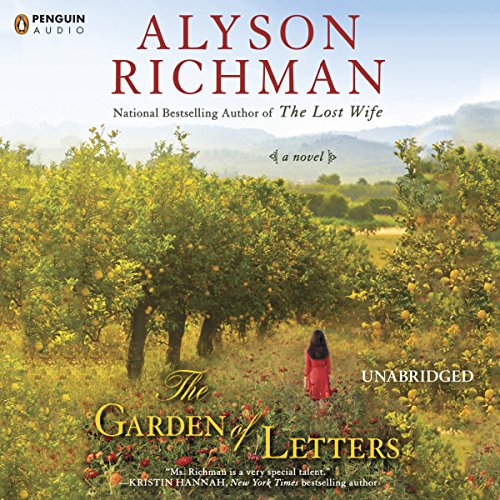 The Garden of Letters

Set against the rich backdrop of World War II Italy, Garden of Letters captures the hope, suspense, and romance of an uncertain era, in an epic intertwining story of first love, great tragedy, and spectacular bravery.

Portofino, Italy, 1943. A young woman steps off a boat in a scenic coastal village. Although she knows how to disappear in a crowd, Elodie is too terrified to slip by the German officers while carrying her poorly forged identity papers. She is frozen until a man she's never met before claims to know her. In desperate need of shelter, Elodie follows him back to his home on the cliffs of Portofino.

Only months before, Elodie Bertolotti was a cello prodigy in Verona, unconcerned with world events. But when Mussolini's Fascist regime strikes her family, Elodie is drawn into the burgeoning resistance movement by Luca, a young and impassioned bookseller. As the occupation looms, she discovers that her unique musical talents, and her courage, have the power to save lives.

In Portofino, young doctor Angelo Rosselli gives the frightened and exhausted girl sanctuary. He is a man with painful secrets of his own, haunted by guilt and remorse. But Elodie's arrival has the power to awaken a sense of hope and joy that Angelo thought was lost to him forever.

"Richman seamlessly weaves together the languages of music and love, reaching into the heart of the reader with artful portraits of heroism, sacrifice and redemption. Fans of The Lost Wife will again savor Richman's ability to tell a remarkable story about people who are unforgettable and real." (Pam Jenoff, international best-selling author)

“Lyrical and rich...filled with beauty and tragedy, romance and heartbreak.” (Jillian Cantor, author of Margot)

“Graceful, mellifluous...read this book.” (Jenna Blum, New York Times best-selling author of Those Who Save Us)

What listeners say about The Garden of Letters

This story went above my expectations. The narrator was absolutely wonderful, and my most memorable moment was when she failed the mission.

A few different angles for a WWII novel but reads much like a flowery, over done romance novel with predictable scenarios. I liked it enough to finish but I can only give it a B-.

I hated to finish this book. Loved the characters. Bought 3 copies so friends could share in this story.

This book was hauntingly beautiful, with many surprising twists and turns.The characters in the book were lovingly brought to life By the narrator and kept you entranced throughout

One of the best books I have read.

I really enjoyed this book. The characters really captivated me. Would highly recommend to everyone.

Excellent in every way

I love how the author worked music into the story line . This is a very well written story which combines love , war and redemption in a beautifully intertwined manner.

I thoroughly enjoyed The Garden of Letters! And the narrator adds another layer to the story. Highly recommend!!

I was captured by the story and the characters.
It was beautifully written even with the pain and sorrow intertwined within it.

I'm not the type of venture into WW2 romance and this book is a clear indication why. I can't image having lived during the Holocaust or the rule of Hitler and Mussolini. Seriously listening to some of the sick, twisted things those who followed them did was enough to make me want to vomit. That being said, my low rating isn't because of the period in which the story takes place, but because of the story itself. First, I can't have been the only one that initially had a hard time following the timeline jumps from chapter to chapter. I didn't realize the dates at the beginning of each chapter were that significant, or that there was such a large gap between Elodie and Angelo's stories. Second, the author spent a great deal of time building up the love stories between Angelo and Dalia and Elodie and Luca and then brought them crashing all day. I would have honestly been more happy had the story ended with Angelo and Dalia living happily ever after and Elodie and Luca living happily ever after. It didn't help that the romantic development between Elodie and Angelo was so rushed and lacked any real emotion. As other reviewers pointed out, things ended so abruptly and with no real closure. There is no true happily ever after here. Elodie's mother doesn't know she's alive and has no idea where she is. And, what happens with the Commandant? Also, a big elephant in the room was the timeline of Elodie and Luca's one time together. As pointed out already, they make love in September and she's three months pregnant in October. When I heard that part, I had to pause the book to try to make sense of it. While the author goes into pretty disturbing details regarding the deaths and torture in this book, she skipped over the more intimate parts with little thought or care.

One thing that nearly turned me off of the book completely though was what happened to Leena. Seriously, I wasn't able to listen to the book for nearly a week. I understand living in Europe during that time period was awful but having to listen to some of the things discussed in this book was too much. I definitely won't be reading another story by Alyson Richman, nor any other WW2 type stories again.

I am glad I downloaded it. I have devoured many historical fiction stories from world war 2, and this one did not disappoint.

My expectations were high After reading reviews I expected an amazing read perhaps too much. It was well narrated but it just missed out on being a story that stands with the best of WW11 fiction Unfortunately for me I paid a premium price

What made the experience of listening to The Garden of Letters the most enjoyable?

The story of the main characters was told in separate time lines, as you follow the main character you find out what brings Elodie on her journey from her home in Verona to Portofino where she meets the one man she has to trust with her life.

What other book might you compare The Garden of Letters to, and why?

There is no book I could compare it too, as it really has a story of its own. This for me was a new look at the Second World War, I loved how Elodie's love of music was the main strength of the main story.

I loved the whole book, mainly because of the narrator as she brought Italy to me as a listener I missed nothing of the main story. I loved how the author through her vivid and wonderful writing I was able to hear Elodie playing her cello as the descriptions were simply perfect.

This is a story which truly brought the Second World War alive though this showed Italy through the war. The cruelty of the Nazis was evident but yet the bravery of the characters was so much more.